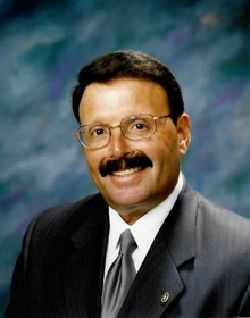 John M. Alati, 72, of Verona, passed away on January 14, 2021. Born in Irvington, John grew up in the Ironbound section of Newark and graduated from Seton Hall Prep in 1966 and Villanova University in 1970. He lived in Irvington for 10 years before settling in Verona in 1988. The co-owner of LaGuardia and Associates, an entertainment production company, for almost 30 years, John was instrumental in organizing summer concerts for communities throughout New Jersey, producing over 200 concerts each year. Credited with launching and supporting the careers of countless artists and musicians, John is beloved in the entertainment industry-and beyond.

Charismatic with an infectious smile and larger-than-life, magnetic personality, John will be remembered for his dynamic sense of humor, natural leadership ability, the way he could command a room, and as a wise advisor and valued mentor. Generous beyond compare, he left a profound impact on so many-whether you met him just once or knew him a lifetime-and his passing leaves an immeasurable void. A fan of Villanova and Seton Hall basketball and Yankees baseball, as well as a lover of music, dancing, travel, good food, and socializing with family and friends, John exuded a zest for life. He was fun and funny, the life of the party-any party. It’s those fun-filled moments along with his sage words of wisdom that all those who knew him will hold dear-and to know John was to love him.

Prior to founding his business with Jerry LaGuardia, John was active in government since the late 1970s, highlights include being appointed as the director of the Essex County Improvement Authority; executive director, Essex County Democratic Committee; and the chief of staff of Essex County Executive Nick Amato; and elected as the Irvington Democratic Chairman and to the Essex County Board of Chosen Freeholders. John loved holding office but also appreciated working behind the scenes and assisting others to get elected.

Proud of his Italian heritage, John was very active in UNICO National, an Italian American service organization, where he was elected as national treasurer, vice president, national president, then served on the Foundation Board for 13 years, most recently as president.

As UNICO National president, his efforts to join forces with the National Italian American Foundation, the Order Sons of Italy, and the Government of Italy on issues of common interest has elevated the status of UNICO and Italian Americans nationwide. Through this partnership, the parties were successful in getting the approval of the Italian language as an advanced placement course in 500 high schools throughout the country. John’s aspirations for UNICO National have brought the organization to national prominence, and he facilitated contributing to a host of worthwhile scholarships and charities both locally and nationally, including the V Foundation for Cancer Research. A major achievement of John’s was the implementation and completion of UNICO National’s 21st Century Capital Campaign attaining its goal of $1 million. John’s other Italian American volunteer efforts include the board of trustees, Columbus Heritage Coalition; vice president, Columbus Education Foundation; trustee emeritus, Italian American Museum, NYC. Honors include, Man of the Year Awards: UNICO National District XI; Verona UNICO Chapter; St. James Church Benefactors; Irvington, N.J. Police Athletic League; Irvington General Hospital; Essex County Young Democrats and Italian American of the Year: Essex County Board of Chosen Freeholders.

In lieu of flowers, donations may be made to The V Foundation for Cancer Research.

Memories and condolences may be shared at shookscedargrove.com.