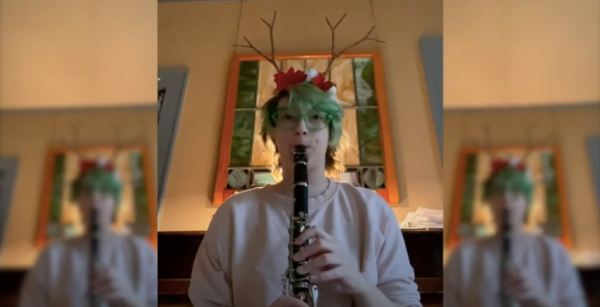 Verona High School’s Concert Band streamed its holiday concert last Friday night, and it can now be viewed on YouTube anytime. With restrictions on in-person practices, staff and students worked together to produce a concert like no other, featuring soloists and ensemble through the wonders of technology.

By early fall, Band Director Erik Lynch expected the annual holiday concert would likely not be permitted in-person. So, he created a Google Drive for students to self-record music they were interested in. Lynch worked with students, virtually, to critique solos. The concert featured solos, percussion ensemble, seniors performing “Auld Lang Syne,” and “Sleigh Ride” performed by the full band.

“This was a period of growth for students. We got to know each other better by working one-on-one, even remotely, ”says Lynch. “Pieces that would have normally taken up hours of rehearsal time together were forced to mostly individual practice times, teaching students accountability.”

Lots of individual practice made the difference. During Cohort Days, when students meet in-person at VHS, they rehearsed “Sleigh Ride,” but the final recording was put together in pieces, after recording together on Zoom.

Virtual band is not ideal, but the band is discovering silver linings and growing musically. Lynch worked with students through Zoom to select pieces for the holiday concert, and credits the students with coming up with organizing a virtual concert.

“Being remote has forced us to think outside of the box in our music education,” says senior Griffin Willner. “Although it has been difficult, it became a positive experience.”

You can watch the VHS concert in the video below. H.B. Whitehorne also produced a virtual holiday concert, and you can see it here.