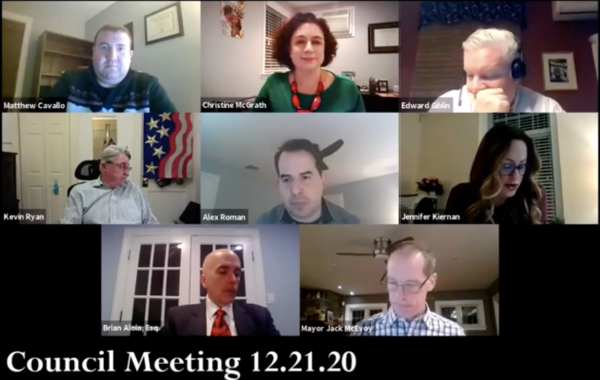 At the Verona Town Council’s December 7 meeting, Councilwoman Christine McGrath introduced two resolutions on bias training for township employees and volunteers, and a third calling for an analysis of all employee salaries to see where Verona stands on equal pay. The Council discussed those resolutions then, and again at the December 21 meeting, before putting them to a vote. Two of the three resolutions failed to get enough votes to pass.

In introducing the measures, McGrath had said they were needed to help Verona avoid bias and harassment incidents, and to make sure we are in compliance with New Jersey’s Diane B. Allen Equal Pay Act. In October, the insurance fund that represents Verona settled lawsuits brought by two township employees over alleged gender pay discrimination that had both been filed before the Equal Pay Act was enacted. (The municipal government did not admit fault in approving those settlements and the Council gave its thoughts on them at its Monday, November 9 meeting.)

At both the December 7 meeting and on Monday night, Mayor Jack McEvoy, Deputy Mayor Alex Roman and Councilman Kevin Ryan had sought to understand why McGrath’s resolutions were needed. (A resolution is an expression of opinion that does not have the force of law of an ordinance.) Verona has had anti-bias training for its employees for many years, and several of the volunteer boards have a training component as well. In both meetings, and many of the previous discussions on the two settlements, all three men have made it clear that discrimination has no place in Verona’s municipal government.

McGrath’s bias training resolution sought to get Town Manager Matthew Cavallo to report the bias training received by all board and commission members, develop a training policy and deliver a summary of the plan to the Council within 90 days. But Cavallo noted that Verona already has an ordinance allowing him to draft such policies, which seemed to undercut the need for a new resolution. Cavallo said later in the meeting that, during his time as town manager, there had only be one complaint about a volunteer board member. He did not specify what the complaint was or how it was resolved. Board members can be removed from their positions by the body’s chairperson or attorney–if it is a board with an attorney member–or even the Town Council.

McEvoy, Roman and Ryan all tried to get more details on what new training for volunteers would entail, how much time would be needed to complete it, and whether volunteers could get credit in Verona for bias training they had already completed at their jobs, since such training is common in most workplaces. They were concerned that if the training were lengthy it could discourage people from serving on boards, many of which are already hard to staff. Councilman Ted Giblin disputed that, saying that people who serve as volunteer coaches in Verona must commit to a three-hour training program through Rutgers. In the end, McEvoy, Roman and Ryan all voted against the resolution, saying they wanted to see more details on what a policy for volunteers would look like. McGrath and Giblin voted for the measure.

By contrast, there was a unanimous vote in favor of the second resolution, which asks the town manager to review the current training for all non-uniformed employees and develop a written training policy and schedule that includes training in implicit bias, diversity, and harassment, among other issues. It also asks for a report from the police about the training that the uniformed officers receive. Council members concurred that this was something within their purview and quickly put the resolution to a vote.

The third of McGrath’s resolutions asked the town manager to do an analysis within the next 90 days of all township employee salaries who “perform substantially similar work,” and include in that report both salary comparisons for each position in similar municipalities and make recommendations for salary adjustments.

Deputy Mayor Roman was quick to point out that this resolution would apply to only a handful of Verona employees because most are covered by collective bargaining agreements that specify a certain rate of pay for each pay grade and provide an appeals process. “I feel like if there were an issue with misclassification of a position in the represented services,” he said, “the proper process is for that employee to escalate that as a concern through their union representatives who would then assist us in reviewing it.” Both of Verona’s union contracts are up for renegotiation next year, so if there are any gender pay discrepancies they could be addressed during those discussions.

McGrath and Giblin voted in favor of the third resolution, but McEvoy, Roman and Ryan voted against, so it did not pass. You can watch the meeting in full in the video below.