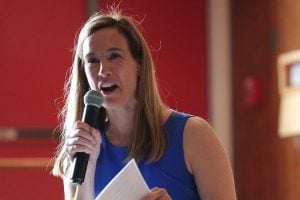 The U.S. House of Representatives voted Wednesday to send the National Defense Authorization Act (NDAA) for Fiscal Year 2021 to conference committee and appointed Rep. Mikie Sherrill (D-NJ11) as a member of the bipartisan, bicameral panel. Sherrill will represent the House Science, Space, and Technology Committee in the negotiations and lead efforts to maintain support for next generation technology and resources for the military.

“In July, we passed a bipartisan NDAA that prioritizes the health and safety of our service members and makes key investments to advance the military’s technology, supply chain, and culture,” said Rep. Sherrill. “I look forward to working with my colleagues to ensure we find bipartisan agreement that maintains these priorities.”

The House first passed the NDAA in July. In that version Rep. Sherrill fought to include key provisions that strengthen Picatinny Arsenal, advance innovation at the Department of Defense, and bolster the Department’s efforts to fight COVID-19. While Rep. Sherrill is a conferee for the Science Committee, she also worked on the bill as a member of the House Armed Services Committee, where the bill passed unanimously. There, she helped to ensure the bill contained provisions that support sustainable energy development and justice for service members who have survived sexual assault, before it was considered by the full House.

Read more about Sherrill’s work on the House-passed NDAA here.