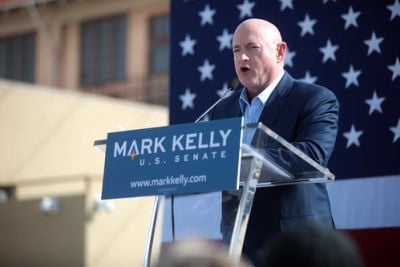 Former astronaut Mark Kelly is now projected to be the winner of the Senate seat once held by the late John McCain in Arizona. Kelly was born in Orange, N.J. and grew up in West Orange, graduating from Mountain High School in 1982.

So why are we writing about him in a news website that covers Verona? Because Marina Koren, a 2008 graduate of Verona High School who covers space exploration for the magazine The Atlantic, has written a long piece on astronauts, including Kelly, who became politicians.

John Glenn, the first American to orbit the earth, was the first astronaut elected to Congress in 1984, but he wasn’t the first to be pushed to consider politics, Koren writes. In 1969, Frank Borman, who had flown to the moon and back on Apollo 8, was asked to run to succeed Sen. Barry Goldwater, also in Arizona. Borman chose instead to be a special advisor to the former Eastern Air Lines and later became its president.

“Whether they’re Democrats or Republicans, when astronauts run for Congress, many of them win,” Koren writes. “Of the at least seven astronauts who switched out their spacesuits for real suits—counting Kelly—four have won. (Jack Swigert, an Apollo 13 astronaut, won a House seat in Colorado in 1982 but died of cancer a week before his term began.) Astronauts seem to do well when they go for political office, even though nothing about traveling to space makes them more suited for Capitol Hill than a teacher or a lawyer. But the public views astronauts as fundamentally different. Astronauts are embedded in the American consciousness as heroes, even celebrities—the career that countless kids say they’d like to have. Even before he opens his mouth on the campaign trail, the astronaut has already charmed his listeners.”

You can read Koren’s full piece in The Atlantic here.