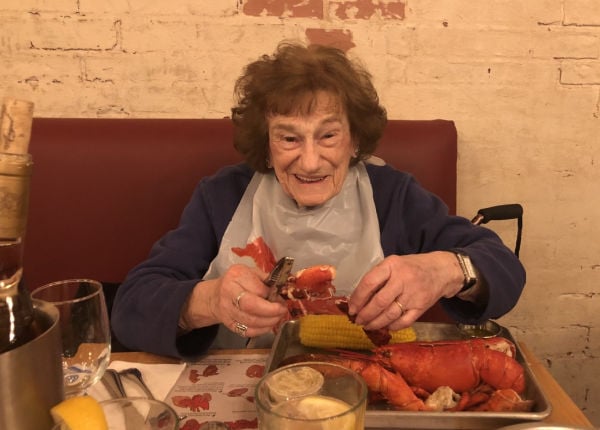 Vivian Segerman Guze, 96, died peacefully on Friday, October 23, in the same Sunset Avenue house where she had lived for the past 70 years.

Until recently, Dr. Guze practiced psychotherapy from her offices in New York City and Verona. She was a long-standing member of the American Academy of Psychotherapists, a group her late husband, Dr. Henry Guze, started as a way for therapists to support each other and the profession. She served on its ethics committee for more than 40 years.

For decades, Dr. Guze was a familiar sight wheeling a small suitcase down Sunset Avenue toward the DeCamp bus stop on Bloomfield Avenue. She stayed in the city several days a week while seeing patients, returning to her Verona home on weekends. A bumper sticker on her car summed up her philosophy of life: “More Curiosity, Less Judgement.”

She grew up in the Bronx, developing a passion for equity under the wing of her mother, who embraced Socialist causes. As a child she played stickball and formed a close friendship with author and activist Grace Paley. Her father was a welder turned artist who created busts out of sheet metal and found wood; the collection decorated her house. Her brother, who lived in England, died last year.

Guze met her husband while doing PhD research in Brooklyn and the two doctors moved to Verona in the 1960s, after accepting positions at the former Essex County Mental Health Hospital in Cedar Grove. It was there she began her pioneering work with touch therapy, after noticing that distressed patients became calmer when a hand was placed on their shoulders. Henry Guze died in 1970 at the age of 51.

She was fascinated by other cultures and travelled regularly to Mexico and the Southwest and had close friends in Switzerland, Ireland and throughout the U.S.

Native American culture held a special appeal. When she was 92 she joined a subgroup of psychotherapists who studied Native American traditions on a yearly wilderness retreat. She was a member of the Montclair Art Museum and enjoyed spending time in their Native American collection.

She held a subscription to the American Ballet Company at Lincoln Center, and loved to dance herself. In her last days, she often asked to hear the song, “Dance Me to The End of Love.”

Toward the end of her life, she took great joy in gifting friends with items she’d collected in her travels. But her dearest possessions were her books. Every room of her three-story, six-bedroom house had floor-to-ceiling bookshelves packed with volumes on anatomy, psychotherapy, medicine, art, sociology and neurology, arranged by subject.

Dr. Guze is survived by two nephews, William and Henry Segerman, of England and Oklahoma, and a cousin, Avron Stoloff, of Verona. Prout Funeral Home is handling arrangements. A memorial service is being arranged by the American Academy of Psychotherapists.