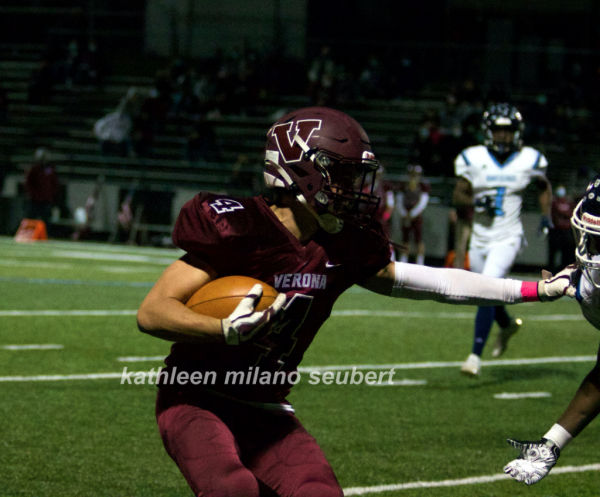 Last weekend, Verona football got crushed by Panthers, the ones from neighboring Cedar Grove. Last night, it did the crushing of another group of Panthers, beating Newark Collegiate Academy 49-13 at home on Sellitto Field.

James Haveron got Verona on the scoreboard first on a 14-yard pass from Cael Zebrowski and then Zach Bucher scooped up a Newark Collegiate fumble in the end zone. In the second quarter, Zebrowski would send a 30-yard bomb into the arms of Joey Petro for Verona’s third TD. 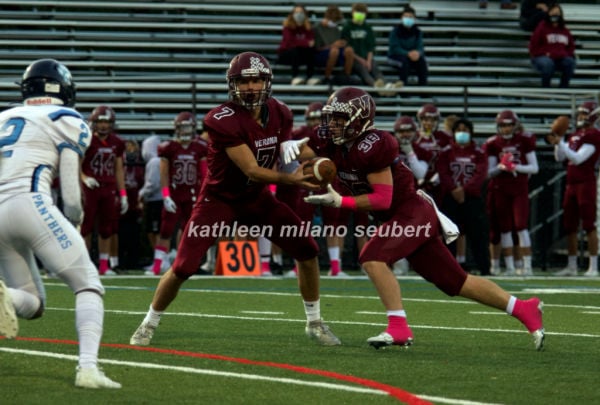 Frank Riggio, whose running and scoring game had been thwarted by Cedar Grove last week in Verona’s 38-7 loss to that team, found the daylight he needed last night and made two trips to the end zone; he would tally up 145 rushing yards on the evening. Then Mike Matarazzo scored and Haveron capitalized on another Newark Collegiate fumble. Cole Martin successfully delivered on all of his point-after attempts.

Newark Collegiate QB Keshawn Downing connected with Zahir Smith for the charter school’s first touchdown and combined with Tygiuan Daniels for the second. 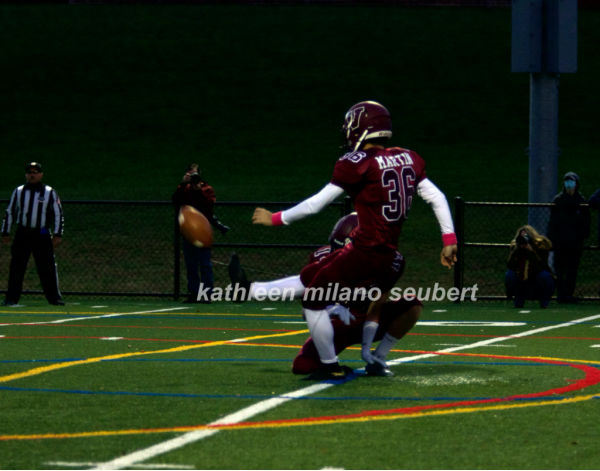 In other Verona sports, both boys and girls soccer had losses yesterday, with the girls falling 5-1 to Montclair and the boys taking Livingston into double overtime before the Lancers’ Holden Miller got the game-winning point.

Verona’s varsity teams will all be off on Monday. On Tuesday, girls soccer travels to Nutley and boys cross country is in Branch Brook Park while girls tennis hosts Montclair. On Wednesday, it’s girls cross country’s turn to be in the park, while boys soccer is at Newark’s Technology High School and tennis is at Livingston. Field hockey hosts their Lancer counterparts on Centennial Field. Tennis recoups a previously rained out matched with Glen Ridge on Thursday, and they host Caldwell on Friday. All of Verona’s other varsity teams have away games Friday including football, which will face Weequahic in Newark.