What’s Next For VHS ’20: AmeriCorps 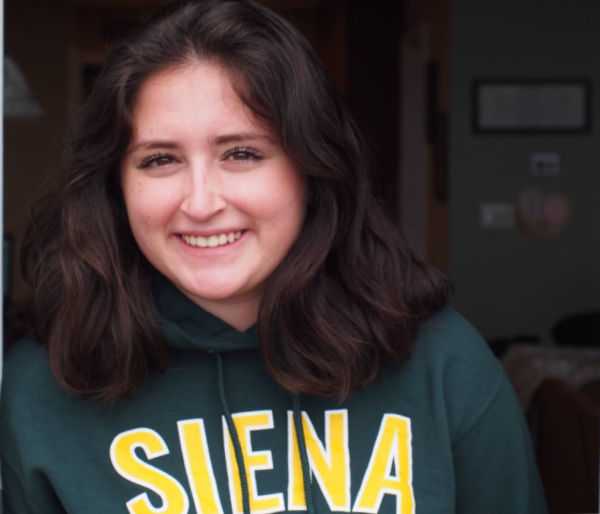 Grace Trupia is putting off college to serve America.

Trupia had committed to Siena College in Loudonville, N.Y. this spring as a communications major with a concentration in digital marketing. But soon after she put down her deposit, she began to have doubts about the upcoming academic year.

“When June came, while still obeying the stay-at-home orders and with a lot of time on my hands, I started to rethink my choice to begin college this fall,” says Trupia, who graduated Verona High School with the class of 2020. “Like many other people in my shoes, I realized that the freshmen year experience I had been looking forward to for so long would not be the same. I was going to be forced to live in a dorm with no roommate, student activities would likely not be as fun and the dining halls would impose many restrictions, and of course, I would need to worry about catching coronavirus myself, or the possibility of dealing with an outbreak while on my own for the first time in a place I am unfamiliar with.”

For a while, Trupia pondered these thoughts and began to wonder what she could do to not lose such an important year of her life. Then she began to research options, and discovered AmeriCorps.

AmeriCorps, founded in 1993 by President Bill Clinton, is a volunteer civil society program that permits young adults from around the country to join a public service work program. AmeriCorps volunteers work with nonprofit community organizations and public agencies in fields such as education, public safety, healthcare and environmental protection. Similar to a domestic version of the Peace Corps, the organization employs over 75,000 Americans annually. AmeriCorps has three component programs, and Trupia will participate in its National Civilian Community Corps (NCCC).

NCCC is a full-time, residential team-based program for men and women ages 18 to 24. Members are based at one of four regional campuses–Vicksburg, Mississippi; Vinton, Iowa; Aurora/Denver, Colorado; and Sacramento, California. Each campus focuses on states nearby but teams may travel to other areas in response to national crises. Trupia will be stationed at Aurora/Denver.

Trupia felt a natural connection with AmeriCorps: She had participated in the mission trips to West Virginia organized by the Youth Group at Our Lady of the Lake. Yet, initially, she decided against it. Trupia felt it would be too much of a hassle to change her college plans, and figured playing it safe and just going to college as planned would be her best bet during a pandemic. But one night, Trupia says, she told herself that, “if I wake up tomorrow and a sign comes along, I will defer my acceptance to Siena and join AmeriCorps for a year.” Call it fate or chance, the next morning, without knowing his daughter’s plans, Frank Trupia read an interesting article in The New York Times about AmeriCorps and showed it to Grace. It became her turning point, and she told her parents about her idea, and her decision to move forward with it.

“I really liked the idea of doing service work during a time like now when it’s needed more than ever,” Trupia says. “I felt that starting college during a pandemic didn’t sound very fun so taking the year to do service and making some kind of difference during a pandemic sounded really awesome. Although I was very excited to start college, I felt that this was an opportunity I couldn’t deny, and Siena College will still be there in the fall.”

Frank Trupia and his wife, Jennifer, were initially surprised at their daughter’s decision and her confidence to move forward with it, but they now look forward to seeing her grow and make a difference. Jennifer Trupia says her daughter’s choice is opening her eyes to other options other than the typical four-year college experience, and hopes other Verona parents and students will look into these options.

“The administration in Verona looked at me like I had five heads when I mentioned AmeriCorps, and I think our school system in Verona should better advertise these options to young students,” Jennifer Trupia says. “For students who are wary about continuing higher education during such unpredictable times, experiences like AmeriCorps are not only strong for a resume, but it is a great use of time to try something new while giving back.”

Grace Trupia says it was easy to apply for AmeriCorps NCCC–easier than submitting the Common App used by thousands of colleges around the country. She had to write a short statement on why she wanted to join NCCC, submit a few recommendations, and list her high school interests and extracurricular activities. After only a few weeks, Trupia was thrilled to learn that she had been accepted. There is no cost to apply to NCCC or to participate, and accepted students can earn a living allowance and an award that can be used to pay for college later. AmeriCorps also pays its volunteers’ travel to their base city and from base to their service project.

Next up came deferring her college acceptance. Trupia says Siena’s admissions staff wholeheartedly supported her decision, and deferred her acceptance for one year, with the same merit scholarship she would have had this fall. Trupia’s admissions counselor even congratulated her on being the first student in the class of 2025.

Trupia says that her family and friends are reacting with surprise to her decision since it is outside of her comfort zone, but that they are also very supportive and proud of her intent to make a positive change in the world. Trupia is eager to make a difference, and looks forward to the personal growth she aspires to gain from the experience.

Trupia departs for NCCC on October 13, and will be part of the program until July 15, 2021. She will be in Aurora until at least the end of October, training with a group of 10 young adults. Then the team will head to its service project, someplace in the U.S. southwest.

“I have been working on this since June so I’m just very eager to go at this point,” Trupia says. “I’m definitely getting a little nervous about the hard work involved and living far away from my friends and family. This will probably be one of the most challenging things I ever do, but I think it is going to be a life-changing year so I’m super excited about it. I’m getting ready to start a new stage of my life and meet the people I will be working with. I’m currently trying to figure out how to pack for 10 months in one duffle bag!”