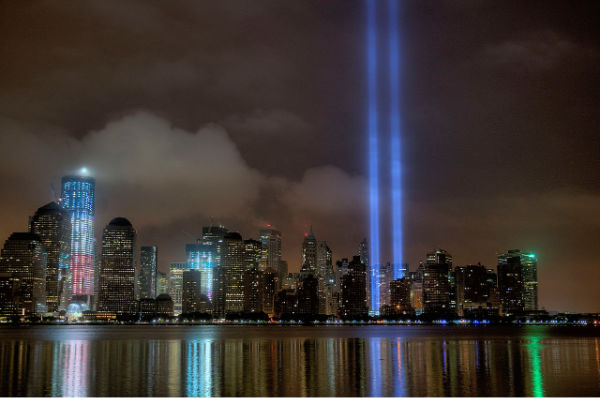 Brendan Erwin’s father William was one of two Verona residents killed in the terrorist attack on the World Trade Center on September 11, 2001. Now Erwin, a 2019 graduate of Verona High School, has started a petition to maintain a tribute to all 2,606 people who died in the twin towers and their surroundings.

Since 2002, New York City has projected two large beams of lights into the air over where the towers once stood on the evening of September 11 and kept them lit until dawn on September 12. But yesterday, the National September 11 Memorial & Museum said it needed to cancel this year’s display because of the coronavirus. According to news reports, it takes a team of almost 40 stagehands and electricians to produce the tribute, which is actually 88 individual lights. The museum said that the COVID-19 pandemic made the work too risky for the crew and instead said that individual New York City buildings would light up with blue lights.

The Tribute In Light has been visible from Verona. “My mom and I walk to where we can see the lights at night,” says Erwin, who also participated in the reading of the names of those killed at the memorial in 2012.

“My family was victimized by the attacks,” Erwin wrote on his petition page. “My mom lost her husband and I lost a father. These lights to me and my mom are a symbol of people still remembering and caring. Not seeing the lights mean that people don’t care about American tragedies anymore.”

You can find the petition here.