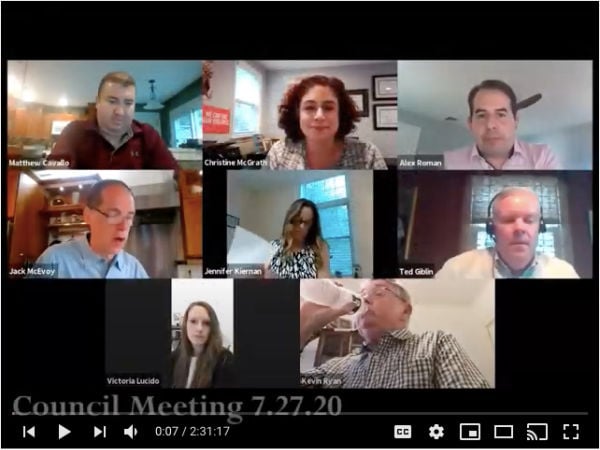 The Verona Town Council voted unanimously on Monday night to buy two large lots to preserve them largely as open space. While the Council again pushed off any decision on a letter of support for the proposed medical marijuana dispensary at 30 Pompton Avenue until its next meeting, residents opposed to the dispensary again dominated the public comment portion of the meeting, criticizing Council members and drawing criticism in return.

Mayor Jack McEvoy opened the meeting with a moment of silence for Rep. John L. Lewis (D-GA5), who passed away on July 17. Verona is flying the flags in the center of town at half-mast to honor the civil rights leader.

Before the Council voted on the $12.8 million bond ordinance to buy the two lots, one at the end of Commerce Court that has been used as the town leaf dump and the other between the Afterglow neighborhood and Eagle Rock Reservation, Township Manager Matthew Cavallo specified that the town would be taking no action now on subdividing a small part of the Commerce Court lot for nine single-family home lots. Cavallo said that that could happen later this fall and that any development would go through full Planning Board review. A lot sale would be one way to reduce the cost of the purchase to Verona taxpayers, but Verona also intends to apply to Essex County and state government for Open Space Trust Fund support. The 25 acres being acquired is more than half of the unoccupied privately-owned land in Verona.

During public comments on the ordinance, the Council reviewed how it arrived at a purchase price for the lots, where the seller had been planning to build 375 housing units. Council members said that while the purchase is expensive, high-density development could have forced Verona to spend heavily to add to its schools and town services. Cavallo also clarified that, while the Open Space Trust Fund that Verona voters approved last year could be used for the soft costs related to buying the property, it might not be used to pay all of the debt service that will stem from the ordinance. “That will be a decision that will need to be made down the road by the finance officer, on which portion of the bond, which portion of the debt will be paid out of which accounts,” Cavallo said.

When the meeting opened for general public comment, many of the callers were again people opposed to the opening of a medical marijuana dispensary at the corner of Pompton and Claremont avenues.  Under state law,  anyone looking to open such a dispensary must have a so-called letter of support from the government of the town in which the facility will be operated in order to open. While a medical marijuana dispensary is not illegal under current Verona law, the Council is looking to prevent Green Thumb Industries (GTI), the company seeking the letter, from also selling recreational marijuana if New Jersey voters approve the referendum on that this November.

While questions raised during public comments must be addressed to the Council as a whole, Rob Caruso drew the ire of Councilwoman Christine McGrath and other Council members because his comments targeted the councilwoman. Caruso asserted that she had not watched a teleconference that he and other marijuana opponents had organized and asked why McGrath has not taken a position for or against recreational marijuana. “When you ran last year you were the, quote, ‘family candidate’,” Caruso said. “Well nothing destroys families more than addiction.”

McGrath said that while she had not attended the live teleconference, she did watch the recording on YouTube. “You’re accusing me of doing all this research and then not yet making a decision on recreational, well there’s no decision to make on recreational,” McGrath said. “It is not legal in New Jersey. At this moment there is no law to make a decision on. And even after November, we won’t even know what this decision is.”

McGrath and Councilman Kevin Ryan suggested that, if Veronans are opposed to recreational marijuana, they should reach out to Verona’s state representatives, Assemblyman Jay Weber, Assemblywoman BettyLou DeCroce and Sen. Joe Pennacchio. “Direct your ire to where it should be directed, and that’s farther up the line,” said Ryan. “This is classic New Jersey politics, put everything down on the local level and try to see if it kicks back up, throw something up against the wall, see if it sticks.”

During public comments, the Council also heard from Hugh Giordano, an organizer for the United Food and Commercial Workers Union Local 152 that has organized marijuana workers elsewhere in New Jersey, who asserted that GTI is anti-union. (The midwest newspaper Quad-City Times reported last November on a drive to unionize a GTI operation in Illinois.)

In other action, Township Manager Matthew Cavallo said that the municipal lot near the corner of Bloomfield and Grove avenues will be opened as outdoor dining spaces for several restaurants in the area, including Bloom, Bella Gente and Grimaldi’s. He also accepted a $150,000 grant from the Essex County Recreation and Open Space Trust Fund to help pay for a replacing the Verona Community Center playground.

You can watch the entire meeting in the video below.