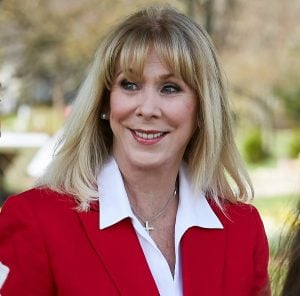 Assemblywoman BettyLou DeCroce (R-NJ26), who represents Verona in the New Jersey state legislature, is calling for the state GOP to lay out a plan for in-person voting that would include the training of younger people to be poll workers in place of the senior citizens who now frequently work there.

The assemblywoman, who served as a municipal election officer for 21 years, said the state should begin reaching out to college students throughout the state to recruit them to work the polls on November 3. Poll workers are paid $200 a day for their work. DeCroce said that younger people are “much less susceptible to the coronavirus’ most virulent effects.” While that is true according to data from the Centers for Disease Control from February through mid-July, Verona has just seen its first positive cases of the novel coronavirus COVID-19 in teens.

In the 2016 presidential election, Verona trained 29 Verona High School students to be poll greeters and one VHS student completed the two-hour class to be a full-fledged poll worker. Verona Municipal Clerk Jennifer Kiernan said Friday that she has already spoken to the Essex County Board of Elections about having college students work the polls this November because so many are not returning to a college campus. There is virtual poll-worker training available.

“We’re trying to do everything we can to make the voting as smooth as possible,” Kiernan said.

In her statement, DeCroce also asserted that an all-mail-in General Election “is ripe for abuse, mistakes, voter fraud and corruption,” echoing the position of President Donald Trump. But the non-partisan Brennan Center for Justice found, in a seminal report, that election fraud is almost non-existent in the United States, whether in person or through mail-in ballots (see “10 Voter Fraud Lies Debunked“).

And when attempted, fraudulent voting rarely succeeds, in New Jersey or elsewhere. Paterson held a city council election on May 12, one of the incidents DeCroce cited in her statement. On July 1, New Jersey Attorney General Gurbir Grewal charged Paterson City Councilman Michael Jackson, Councilman-elect Alex Mendez and two other men with voter fraud and other crimes. On July 17, Rep. Steve Watkins (R-KS2) stepped down from his Congressional committee assignments after being charged with three felonies and a misdemeanor related to fraudulent voting. In July 2019, a Republican campaign worker in North Carolina was charged with trying to manipulate turnout in a 2018 Congressional election. The original results in that election were overturned and voters had to go back to the polls.

In New Jersey, voters have been able to vote by mail in every election for the last decade, and many have. But the state mandated that the July 7 primary would be conducted almost entirely by mail because of COVID-19, and there have been challenges to large-scale voting by mail. To ease the increased volume on post offices, Essex County installed five secure ballot drop boxes around the county; those boxes cost $25,000 apiece. And while voting machines tally the results as soon as the polls close, the ballots from the primary are still being counted in Essex County and elsewhere around the state. Essex County also has a team of four people, two Democrats and two Republicans, to review any ballot signatures that seemed at variance with the signatures in the voting registers.

DeCroce said she believes that, with proper safeguards at polling stations, as they already are at supermarkets, liquor stores and restaurants, in-person voting can be as safe or safer than many activities people engage in currently.

“I don’t see how waiting on a relatively short line at a polling booth is more dangerous than waiting on a long line at a motor vehicle center or the supermarket,” said DeCroce.