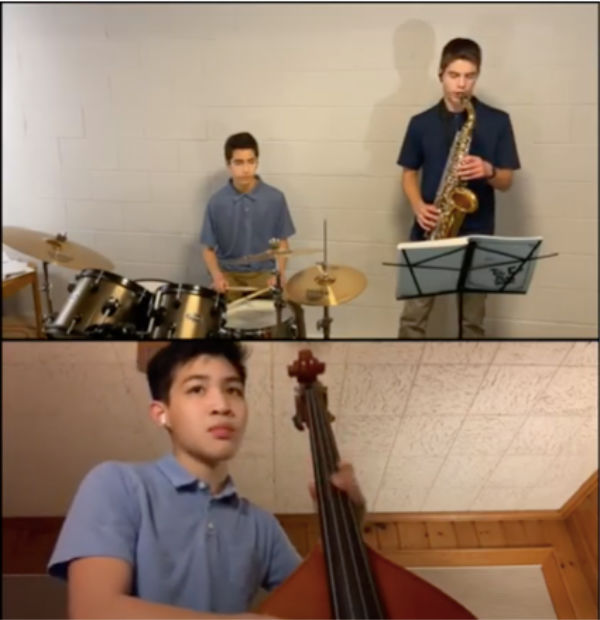 So you’ve listened to the Zoom concert from the New York Philharmonic and the Metropolitan Opera’s at-home gala; you watched Jimmy Fallon, Billy Idol and The Roots do a remix of “Dancing with Myself” with instruments sourced from around their houses. But have you heard the virtual music coming out of H.B. Whitehorne Middle School?

There have been Neighborhood Jams, with students encouraged to step outside and record themselves playing a few minutes of whatever they liked. There was also a virtual version of Music in the Parks, the end-of-year performance usually held down at a school near Six Flags Great Adventure and followed by a trip into the amusement park.

“As you can imagine, trying to turn band and chorus into a virtual class was difficult,” says Brian Michalowski, one of HBW’s music teachers.  “The technology simply doesn’t exist for kids to play their instruments or sing at the same time and be perfectly together. All of those virtual choruses and bands are actually everyone recording separately with a ‘click track’ and then someone spending hours to edit and line it all up.”

Since Verona went on remote learning in March, HBW’s music students have had weekly assignments to advance their skills. Then, at the end of May 27, each student had to pick one solo piece to learn for about two weeks and submit a recording of it for a portfolio website that was  released to parents in early June.  For that assignment, eighth graders Patrick and Matthew Huaman teamed up with Riley Ying to play “Blue Bossa,” a jazz piece written by Kenny Dorham and first played by Joe Henderson.

But the musical year isn’t done at the middle school. HBW is now having “Live from Home” concerts. Students will log on to Google Meet with their band or chorus, and after an introduction by Michalowski and fellow teachers Dan Halpern and Amanda Hamilton, students will perform their solo for their families. The final act will be a joint performance by Michalowski on piano and all the students playing their own part at the same time. (These performances are closed to the general public.)

“Throughout this challenging time one thing has remained true: The community of Verona truly has music in its heart,” Halpern wrote on the portfolio website. “Music has served as a way to help us feel together when we are physically apart. It has brought smiles to people’s faces, and comforted people during hard times. In this unprecedented time, music has given students a chance to express themselves when there are simply no words to describe how we feel.”