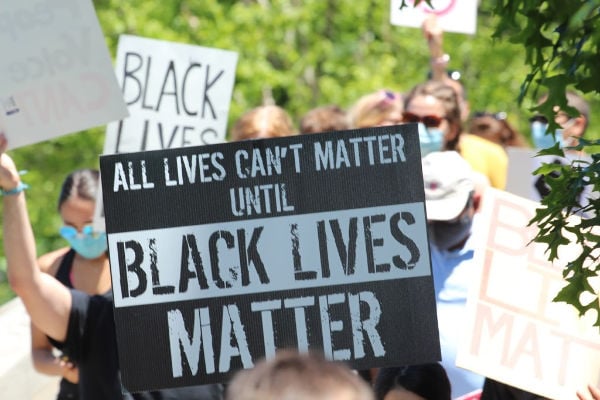 Led by several current and former Verona High School students, a large crowd marched today from Verona Park to Town Hall in support of Black Lives Matter. The rally, which was organized by Julia DiGeronimo and Lily Dastis, VHS ’19, began at the park bandstand with 8 minutes and 46 seconds of silence, which was how long a white Minneapolis police officer was filmed kneeling on the neck of George Floyd while arresting him. The black Minneapolis resident died on May 25 as a result of that after repeatedly saying that he could not breathe.

At Town Hall, the crowd heard from several young people of color who had grown up in Verona. “I am here to shed light on a perspective that might be new to some people,” Dwayne Lawson said. “Simply because of the color of my skin, I’m in danger of becoming a new Twitter trending hashtag.”

“Most of my family members are women,” added Lawson, a 2019 graduate of VHS. “And every day I wonder how it must feel to have a brother or a son or a cousin or nephew go outside and be afraid that he’s not going to come back because most people don’t like him because of his skin color.”

Ariane Duhaney, VHS’ 15, spoke about her experience with racism in Verona. “Growing up in Verona as one of the few black people in the entire school system took a mental and spiritual toll on me that I could not fully realize until I left Verona,” she said. “A few racially charged incidents at HBW set the tone for high school, and I began to realize that a lot of the racial bias my fellow classmates had were simply lifted rhetoric from their parents.”

“Here I am today to tell everyone here that not only do black voices matter,” she added, but black lives matter.”

Marwa Elessawy, VHS ‘18, was critical of the statement issued by Verona Police Chief Christopher Kiernan about the death of George Floyd. “Nowhere in your statement regarding George Floyd did you mention the words race or black,” she said. “You cannot condemn the racial violence against George Floyd without condemning the racism, driving police brutality against black Americans.” Chief Kiernan and several Verona police officers marched with the rally but were not among its speakers.

Elessawy spoke about an incident of what she said was racial profiling of her mother, a Muslim woman, by a police officer in Verona Park. Chief Kiernan said after the rally that Verona police investigated the incident and determined that the officer was a member of the Essex County police force. Verona turned its report over to internal affairs in the Essex County Sheriff’s Office.

Several of the speakers issued calls for reducing police department budgets and re-allocating those funds to services that they said could improve the lives of people of color, such as education, mental health services and better housing. Citing a well-documented statistic, Elassawy said that out of 10 million arrests made in 2018, only 5% were for violent crimes. “This means that the vast majority of policing does not respond to or prevent violence, but rather serves as a bandaid for our racial and social inequalities,” she said.

Tawanna Brown, a rising senior at VHS, spoke passionately about those inequalities and police brutality against black people. “I am George Floyd,” she said. “My fellow brothers and sisters are George Floyd. My ancestors were George Floyd.”

The speakers called on the mostly white audience to be true allies of black people going forward. “Please don’t stand in front of us or for us,” Lawson implored the crowd. “Stand with us.”