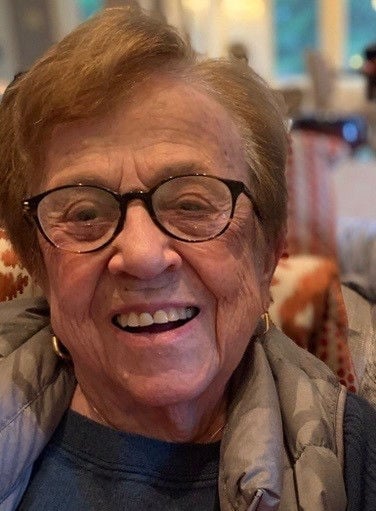 Regina Klein (née Gershenow) died peacefully of natural causes on May 25, 2020 at the age of 92. She is predeceased by her parents, Chaim and Zena (Fix) Gershenow, her husband of 50 years, Eric Klein, and her dear friend of 80 years Rena Frelow. She is survived by her three loving children, Steve (Nancy Barbe), Richard (Michele Hemingway) and Barbara, her five grandchildren, Alexandra (Adam Seidman), Ben, Emily, Zoe, and Noah and her two twin great-granddaughters, Eleanor and Grace.

Reggie was born in the Bronx on January 6, 1928 and attended Evander Childs High School from which she graduated at the age of 15. She graduated from Brooklyn College in 1947 and married Eric in 1948. Reggie taught elementary school in East Harlem for several years before she and Eric bought their first home in Levittown, N.Y. in 1953, and there began their family. In 1962, they moved to Verona, where they lived for 28 years. Reggie served the Verona School system first as a school librarian, and then as an elementary school teacher at F.N. Brown and principal at Laning Avenue and then Forest Avenue and Brookdale Avenue schools for over 25 years. In 1990, Reggie and Eric retired to Santa Fe, N.M. where Reggie lived a rich and active life for nearly 30 years.

Reggie’s life was guided by several principles: commitment to family, belief in justice, and a love of Yiddish. At just under five feet tall, she was nevertheless a towering presence in the lives of her children and grandchildren. In retirement, she continued to travel to New Jersey to visit family and friends several times a year. She followed the news avidly and was always ready to debate the issues of the day with any family member (or anyone else, for that matter) who engaged her. She was an avid devotée to The New York Times crossword puzzles, which she always completed in ink. Reggie attended every graduation, remembered every holiday, birthday, and anniversary, and was quick to remind if someone else forgot. She held and loved to share an encyclopedic knowledge of family history through stories and photos.

Reggie read voraciously on a virtually limitless set of topics and genres, and belonged to multiple book groups. She was a founding member, past president and longtime board member of Beit Tikvah, her synagogue in Santa Fe. She was also a past president of the Santa Fe chapter of Hadassah. She was a member of Workmen’s Circle, a founding supporter of the Yiddish Book Center in Amherst, Mass., and a proponent of many progressive causes and candidates. She always held dear the motto of the Workmen’s Circle: “a shenere un besere velt – for a more beautiful and better world”.

In honor of Reggie’s memory, the family requests that donations be made to the Yiddish Book Center or the charity of your choice.