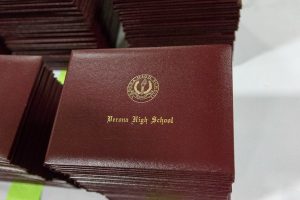 Last Friday, Verona High School announced plans for a virtual graduation ceremony that would involve videotaping students individually before graduation and then streaming a combined video on graduation night. Since then, some members of the class of 2020 and their families have appealed to the high school, superintendent and even town government for a reconsideration of the plan.

Austin Frank, a current senior, created an online petition for a graduation parade on Bloomfield Avenue, while Austin Camp, a 2017 graduate of VHS and the brother of Brianna Camp, a graduating senior, posted an appeal on Facebook for a socially-distanced in-person ceremony.

As of right now, VHS remains committed to its virtual graduation plan. “For as many people focused on why we should have a physical graduation at all costs, there are an equal or greater number of people who feel quite the opposite,” Superintendent Dr. Rui Dionisio wrote in an email to parents who had appealed for an in-person ceremony. “Essex County currently has the largest number of deceased in the state. The total number of deaths has now toppled 10,000 in NJ alone. There is no guarantee that students would abide by social distancing guidelines and this would be impossible to effectively enforce. These risks are highly problematic for those people rightfully concerned with their health and safety. We have students who are themselves immunocompromised and will be unable to attend a physical graduation, even if it were socially distanced. Other families have informed us that they have elderly relatives or pre-existing health conditions that preclude them from being in attendance. Likewise, their graduate would be unable to attend so as not to compromise their family members.”

Verona Mayor Jack McEvoy, a graduate of VHS, posted a note to the township’s Facebook page that emphasizes that graduation is not within the jurisdiction of the Town Council. “The Mayor and Council have no ‘say’ in the determinations of the Board,” he wrote. “It is the State that has set a policy that does not allow for in-person graduation ceremonies.”

“Again, I have had several phone calls with residents who support in-person ceremonies, a parade and or other celebratory ideas, but I think that until the State’s restrictions are lifted, we are simply spinning our wheels,” McEvoy wrote. “I know it seems trite, but I can’t help but think of the plight of a family when it loses a loved one and has only one choice for now: a virtual funeral. It’s a stark difference, but a meaningful one. These are the unfortunate circumstances that we are faced with, but people are making the best of this truly awful health crisis.”

The school district has investigated the graduation parade idea as well, even though online petitions are not legally binding. Dionisio said in his email that a parade could not be permitted because “it creates safety risks to graduates, motorists, pedestrians, and staff.” And neither a socially distanced in-person ceremony or a parade would compensate for other lost aspects of a traditional graduation in Verona: the senior breakfast the morning of graduation and the Project Graduation overnight event afterwards.

Yet all might not be lost. Dionisio said in his email that the school continues to monitor other options. “The possibility of a more traditional graduation in the future has not been overlooked,” he wrote. “There are however, numerous constraints to grapple with. Our buildings will be relatively unavailable with school construction throughout the summer and into the fall. Additionally, our normal graduation location at Caldwell University is unavailable based on the current health situation, as is the case with the availability of other school districts. The district would explore a rescheduled graduation in the future if conditions improve, upon the recommendation of public health and elected officials.”

Dionisio said, in his latest Superintendent Corner Column, that plans for H.B. Whitehorne’s 8th grade Promotion Ceremony and the Fourth Grade Farewells at the four Verona elementary schools are being finalized and will be entirely virtual.