Since the novel coronavirus COVID-19 slammed into the U.S. economy in March, Congress has approved $670 billion in emergency assistance for small businesses nationwide. Some of Verona’s small businesses have gotten relief through the federal government’s Economic Injury Disaster Loan (EIDL) and Paycheck Protection Program (PPP) measures, but it hasn’t often been easy and the assistance doesn’t begin to make up for what they have lost in business to the pandemic.

“It definitely was not easy to get,” says Daniel Vecchiarelli, the owner of the Bello by Daniel Ross barber shop on Bloomfield Avenue, which has been closed since March 18. “If they said enrollment opened at 9 a.m., I got up early and I was at my computer 15 minutes ahead of time.” He wasn’t successful on his first PPP application, when some very large small businesses snared the lion’s share of the funding, but he was approved on his second try.

EIDL was an existing program from the U.S. Small Business Administration (SBA) that was re-purposed for the pandemic. It is available as an unsecured loan for up to $25,000 or a secured loan that can be as large as $2 million. It can be used to pay for operating expenses but EIDL recipients are specifically precluded from using it to replace lost revenue. The PPP, as its name implies, is all about payroll. The loans are based on 2.5 times the small business’ payroll and the bulk of the proceeds–75%–must be used for payroll. Small businesses cannot use any part of a PPP award to pay their mortgage, rent, utility or business vehicle costs, even if they run a home-based business or need the vehicle for their business. When the PPP was enacted, small businesses were told the loan would be forgiven if they hired back the workers they had laid off, which had led some small businesses to fear complex paperwork. But on May 14, the U.S. Treasury Department and SBA said that all loans of less than $2 million would be forgiven.

That’s not been the only re-calibration of the federal programs. The initial $350 billion program ran out of funding two weeks after it opened, forcing Congress to approve an additional $320 billion in funding. In late April, The Wall Street Journal found that dozens of large, publicly traded companies got more than $500 million from the PPP and that at least two dozen employed more than 500 people, the SBA’s upper limit for a small business. The outcry around the involvement of larger, publicly-traded companies in a program that that had been billed as relief for Main Street America led many larger companies to return the funds they had gotten.

It is not known how many Verona businesses applied for, or were successful in getting either the EIDL or the PPP; the federal government is not reporting on that. Steve Neale, Verona’s director of administration and economic development, has sent a survey to 400 people he identified as small business owners, self- employed or sole proprietors, but has only heard back from a handful. Rep. Mikie Sherrill (D-NJ11), who represents Verona in Congress, said during her virtual town hall on economic recovery last Thursday that she, too, has been surveying businesses in her district, but does not yet have a picture of whether either program reached those who needed help.

Lisa Munjack, a co-owner of Verona Yoga, says while her business got EIDL assistance, it has so far not been successful with the PPP, though she has applied twice. Her business’ regular bank, Chase, is not accepting new applications, so she tried last week to go through Square. “The problem is finding a bank that’s reputable that will accept an application,” she says.

Part of the reason is that, as banks have gotten bigger, they have gotten less interested in small business lending. A 2014 white paper by a former SBA administrator found that, while banks’ transaction costs on a $100,000 loan are comparable to those on a $1 million loan, the smaller loans bring less profit. Inc. magazine, which reports on small companies, found that community banks were not initially prepared for the PPP program. Chase approved more than $14 billion in loans in the first PPP program at an average loan size of $515,304, while the average loan overall was $207,000. For round two, $30 billion was specifically set aside for smaller banks, and the average loan size dropped to $73,000. Still probably not the average loan request of a Verona business, but getting closer. (Inc. says that not all of the round two money has been claimed.)

While Verona Yoga waits, it is getting creative to keep some business flowing. After freezing its clients’ current class packages, the studio developed lower-priced virtual classes on Zoom, as well as virtual one-on-one sessions and yoga parties. “People are trying a lot of new things now,” says Munjack, “so we’re doing an absolute beginner yoga workshop. People can take a four-week class and add it to things they can do during quarantine.” She also hopes to add a class for children in the afternoon.

Munjack and other Verona business owners credit Neale with keeping them posted on the relief programs even as scams and misinformation proliferated. Neale, who also has a hand in running the Verona Chamber of Commerce, used a database that he has been building on Verona’s retail, restaurant, office- and home-based businesses to send daily emails about what to do and when, and has set up a COVID-19 assistance information page on the town’s website. 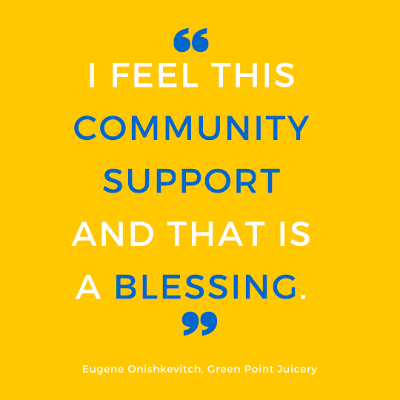 “We got a lot of information from Steve,” says Eugene Onishkevitch, the owner of Green Point Juicery. “That was a huge help.” Onishkevitch was able to apply what he learned to get “a little bit” of assistance for his Verona shop and for his two other stores in Morristown and Maplewood, all of which have remained open for curbside pickup and delivery during the pandemic. Green Point also participated in a food delivery to Saint Barnabas organized by Neale, sending over 100 of its healthful beverages to frontline workers. Onishkevitch has 14 employees across the three stores, but it took two tries to be successful with the PPP. “I am thankful for all the people calling to ask how they can purchase a gift card,” he says. “I feel this community support and that is a blessing.“

One of the keys to success in these programs may be a business owner’s comfort with technology. All applications had to be submitted online and, for the PPP, businesses needed to have access to specific payroll reports. While Onishkevitch had to wait for his accountant to respond with that information, Bello’s Vecchiarelli was able to download what he needed right from his payroll services provider, ADP, which is a member of the Verona Chamber of Commerce.

While these Verona businesses appreciate the assistance that they are receiving from EIDL and PPP, they stress that the relief programs do not begin to cover the losses that they have suffered because of COVID-19, or offer much relief about when and how they can fully re-open. The state allowed non-essential construction and non-essential retail stores to resume operations this morning, though the latter for curbside pickup only. Others, like Verona Yoga and Bello must wait. “I can’t even reach out to my clients yet,” says Vecchiarelli, who will celebrate his fourth anniversary in Verona on May 20.

“Every business that I talk to, we’re all pulling together,” he adds. “Our No. 1 priority is everybody’s health and safety. It’s important to go back, but when the time is right.”