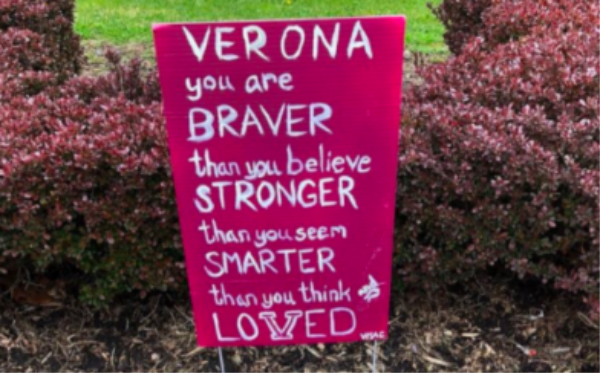 Verona High School announced the plans for the class of 2020’s graduation and it is safe to say there has never been a graduation like it. The school is going to film individual students and their families on Sellitto Field and then stitch the whole thing–tassel turn too–into one virtual graduation ceremony that will be streamed on Facebook and YouTube on June 19, graduation day, at 6:30 p.m.

The plan, which was developed in consultation with seniors and parents, calls for students to make an appointment to be videotaped on the VHS field receiving their diploma with four family members. Families will get appointments to come to the field between May 26 and June 3. Unlike the traditional graduation, where students walk in front of the audience in silence and families remain in the stands, 2020 graduates will have their names announced on the loudspeaker and then get a chance to deliver a brief message to their fellow students. Parents and guardians will be able to record a message to their graduate. Each senior will also be recorded turning his or her tassel and throwing a cap in the air, which the video will then present as if students had all been together.

Spectators will not be allowed at or near school property during the filming and Sampson Drive will be closed to normal through traffic. Families will be allowed up Sampson according to their appointment time, but must remain in their cars until they are called in to be filmed.

There will also be a senior montage video and a sign display in front of VHS. For the video, students are being asked to send the school one picture each from elementary school, middle school and high school. The school district is designing a yard sign for every graduate and, during the week leading up to graduation, the signs will be installed on the front lawn of VHS with a celebratory banner. Students can take picture with the signs, although social distancing will be required.