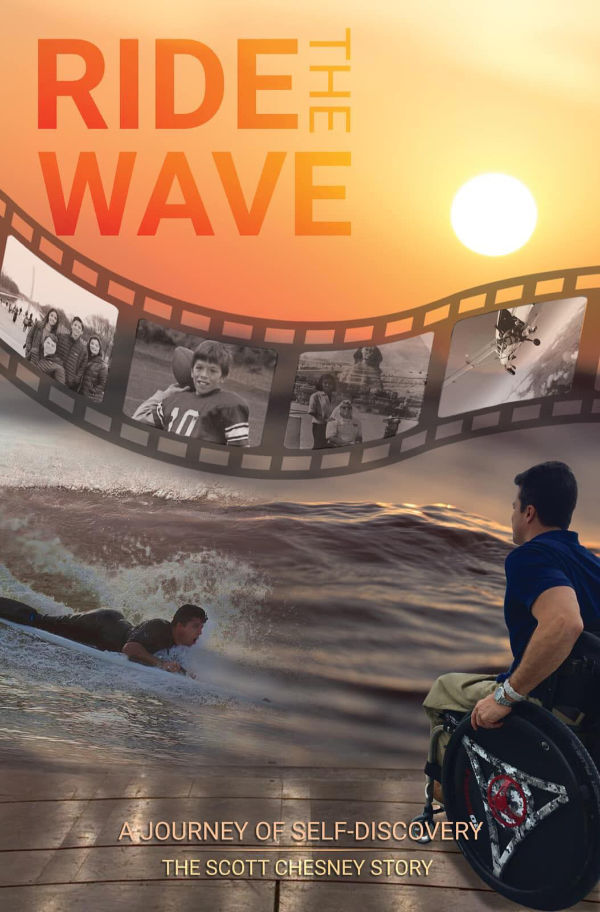 Scott Chesney decided to learn to surf in 2015. That might not be remarkable in New Jersey, even for a middle-age guy, because we’ve got 130 miles of coastline and some decent waves. But it was a major undertaking for Chesney, once a star athlete at Verona High School, because he has been paralyzed from the waist down since the age of 15 due to a spinal stroke. A group of friends adapted a surfboard for him, and off he went–until a wave went wrong and Chesney ended up with a broken leg. There were months of grueling rehab after that, which made it hard for him to pursue his career as a motivational speaker.

Along the way, Chesney’s exploits caught the attention of some documentary filmmakers. They wanted to make a movie about his life and he agreed, with a caveat. “I said, ‘I want it to be a movie that helps people with their lives’,” Chesney said. “I want it to flow like my speaking presentations. I want them travel through me and see changes that can happen in their lives. They can have one ear open to me and one open to their own lives, so that that they can ask themselves, ‘how can I bounce back from adversity?’ ”

“Ride the Wave,” the movie that Nulty Films created, was supposed to have its premiere at several domestic and international film festivals this year. The outbreak of the novel coronavirus COVID-19 scrambled those plans. But rather than holding off on their release, Chesney and the filmmakers devised a different route: this Friday, April 24, you will be able to rent or buy the documentary through Vimeo.

“There may never be a better time to share this with the world than now,” says Chesney. “People are seeking hope, courage and gratitude.”

Chesney says that, eventually he wants to bring the film’s message of overcoming adversity in person to his talks at companies, colleges and schools, as well as rehabilitation and veterans hospitals and pediatric facilities. In the meantime, he and Nulty Films will make the documentary available to home viewers and virtual screening parties, including some to benefit charities.

And Chesney hopes that, as they watch “Ride The Wave”, viewers can take a page from the support group he manages for people with disabilities. “I don’t think that anyone is truly prepared for what we are going through,” he says. “But our disabilities have prepared us well. The weeks or months we have spent in the hospital, the secondary conditions that can leave us bed-ridden. You get to a place that you adjust to your limitations.”

Information about accessing “Ride The Wave” on Vimeo will be posted to the film’s website. In the meantime, you can watch the trailer here:

The full documentary can be watched here.