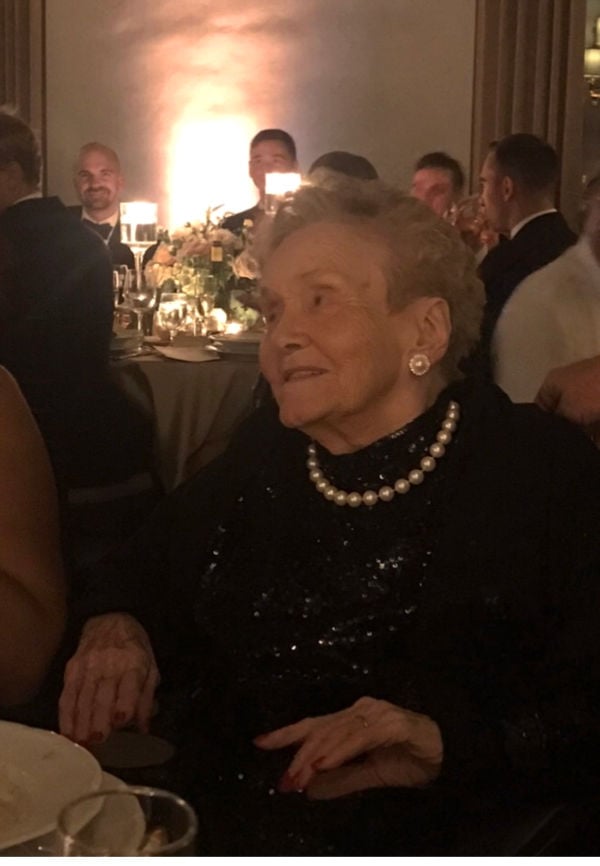 Mildred Mary Walsh Jacobs, 94, passed away peacefully on March 25, 2020, and will be laid to rest beside her beloved husband Frederick, at Immaculate Conception Cemetery, Upper Montclair.

Born on October 29, 1925 to James and Anne Caufield Walsh, in Elizabeth, Mildred was a longtime resident of Verona. She grew up on Gould Street, attended Our Lady of the Lake School, and graduated from Mount St. Dominic Academy in Caldwell, where she was her class vice president and valedictorian, and Berkeley Secretary School in East Orange. She was employed by Frank H. Taylor.

Mildred remembered when, in the 1930s, her family took the 29 trolley from Newark past the old cow barns and watched horse and buggies trot across the frozen lake in Verona Park where she would later spend winters skating. After marrying Fred, a combat veteran of Patton’s army, in 1947, and supporting them while he was in college, she gave birth to eight children in 12 years. Their family home on Morningside Road is somehow still standing.

Throughout her long and storied life, Mildred was always fiercely loving and loyal to her family and friends. She always rooted for the underdog. She remained a longtime communicant at Our Lady of the Lake Church. Millie was a thoroughly modern lady but kept that old-fashioned way of speaking: Men were fellows; weddings, marital vows. Perhaps unsurprisingly, Mildred never learned to drive a car. She did, however, make sure she always had a ride and never missed a party.

Mildred loved many things: her family, a sharp joke, and a proper pint. Not always in that order. Her quick wit lasted until the end, and she could take as well as she gave. If you called her a “tough, old broad,” she would take it as a high compliment. Her heart and humor, as big and sprawling as the family she created.

Mrs. Jacobs is preceded in death by her husband of 54 years, Frederick (Fred) T. Jacobs, Sr.; her son, James E. Jacobs, and her sister, Claire A. Bruso.

In lieu of flowers, donations to the Our Lady of the Lake Endowment Trust Fund, 22 Lakeside Ave, Verona, NJ 07044 and/or the Center for Disaster Philanthropy in her memory would be appreciated.

All will be invited to attend a Mass of Thanksgiving for her incredible 94 years at a time when it is deemed safe to do so.