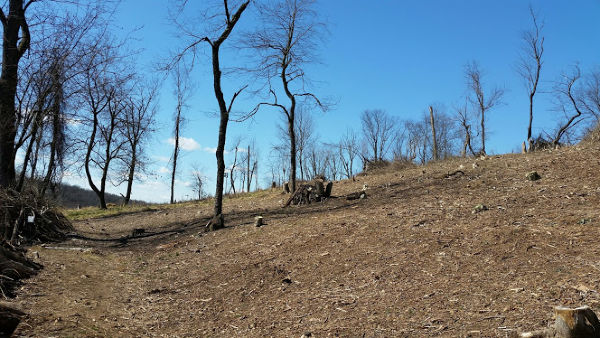 This past Sunday, volunteers finished clearing brush from the last bit of the Hilltop Conservancy‘s next tree-planting area at the Hilltop pond site.

Over the last few weekends, volunteers working under the guidance of Conservancy Treasurer Theresa Trapp have cut and cleared vines, shrubs, branches and dead trees from approximately one acre of the hilltop above Verona’s youth sports fields. The area was an open pasture a century ago, but had become overrun in recent years by invasive plants and had suffered damage from the emerald ash borer. “Those of you who started on this area last year remember what an unholy tangled and impenetrable mess it was,” Trapp wrote in an email to volunteers.  “See the pictures for how it looks today. What a difference!”

“Special thanks to the Scouts and dads from Troops 1, 6 and 9, from North Caldwell, Caldwell and West Caldwell respectively,” Trapp added, “We couldn’t have done this without you!” The hilltop site around what was known as Prisoner’s Pond is on the border of Verona and North Caldwell; the Essex County Prison Annex occupied the land around it for most of the 20th century. 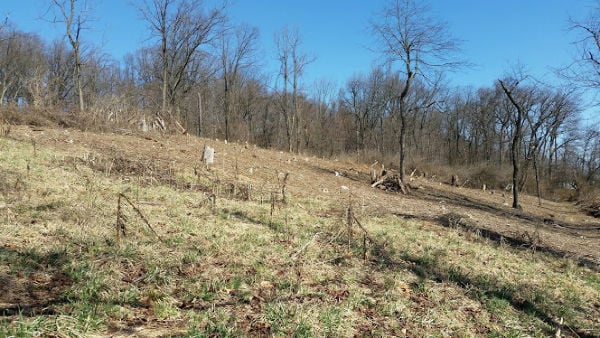 The next step is to finish cutting and spraying stumps of the bush honeysuckle that had invaded the site, and Trapp says she still needs chainsaw help for that. Then the Conservancy will bring in an excavator to dig about 100 planting holes so that the area can be reforested with native trees. Last year, volunteers working on a weekend planting project put in 80 trees at an adjacent site, including Silver Maple, Black Gum, Red Maple, Pin Oak, Basswood, and Tulip Poplar. Trapp hopes to hold this year’s planting push in late April.

“Thank you everyone,” she wrote to volunteers. “Fantastic progress on our project to restore the forest at Prisoner’s Pond!”

The Hilltop Conservancy’s mission is to restore the wildlife habitat in the Hilltop’s grasslands, forests and wetlands and make them a destination for hikers, birders and other nature enthusiasts. Its first restoration project was a 15-acre grasslands site. It then restored a 3-acre area that was once the site of the power plant, laundry and equipment garage of the former Essex Mountain Sanatorium, a hospital for tuberculosis patients at the beginning of the 20th century. After the 5-acre Prisoner’s Pond project is completed, the Conservancy hopes to restore a 6-acre wetlands to the north.