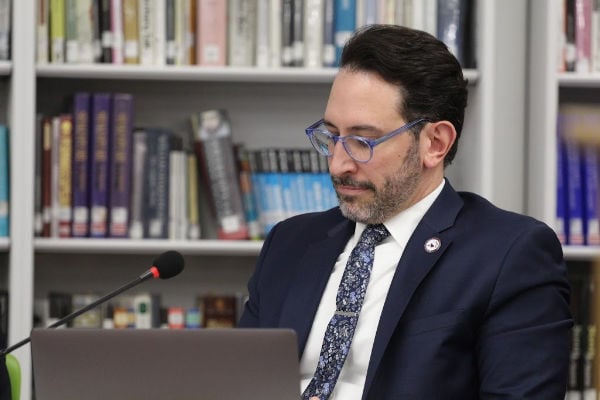 The Verona Board of Education voted unanimously tonight to approve a new contract for Superintendent Dr. Rui Dionisio.

Pam Priscoe, a BOE member who works for Verona’s tax assessor by day, conceded that deciding on the contract renewal has not been easy for her. “I have felt strongly that it was a large number,” Priscoe said of the contract, “and I deal with the taxpayers every day. But I’m in agreement with everything that you have done for the district,” she said to Dionisio, “and I appreciate what you have done.” Priscoe also volunteered to be part of the committee to renegotiate Verona’s teacher contract. That will be helpful to the Board since, neither BOE members Tim Alworth nor Sara Drappi can be involved in Verona’s contract because they are educators in other districts, .

Both BOE President Lisa Freschi and Vice President Jim Day thanked Priscoe for her decision. “In December,” Day said, “I wasn’t sure I would be sitting here in February having this discussion and this vote.” The BOE had been scheduled to vote on the contract at its December 10 meeting, but Dr. Dionisio withdrew it from consideration after some residents mounted a Facebook campaign against the terms of the contract and against holding the vote before Drappi, who was elected to the BOE in November, had taken up her seat on the body.

Under his previous contract, which dates from 2017, Dionisio’s salary was $205,000, including merit bonuses. The new contract eliminates merit bonuses. The 2017 contract included a clause that it would need to be renegotiated if New Jersey ended the cap on superintendent salaries and the cap was ended in July 2019.

Dionisio assumed the role of facilities director in 2018 when Verona needed to cut a full-time position to close a $160,000 budget gap caused by increased out-of-district placements for special education students and demand for extra classes at Verona High School. If Verona were to have hired a full-time director of facilities, the cost would have been at least $140,000. Dionisio’s assumption of the facilities role has saved Verona $220,000, Freschi said at the last meeting.

At the last BOE meeting, Freschi outlined the progress Verona’s public schools have made under Dionisio, including curriculum changes, new communication tools, the implementation of a so-called house model at H.B. Whitehorne Middle School, and advisory and action committees whose work led to the passage of a $550,000 ballot question to fund mental health services in all six Verona schools. Dionisio, who has increased the district’s reserve accounts, also oversaw the implementation of the 2014 referendum that overhauled the 60-year-old heating system at Verona High School  and turfed both VHS sports fields. He championed both the full-day kindergarten ballot question and the referendum that passed last November. Prior to Dionisio’s hiring in August 2014, Verona had had six superintendents in 16 years.