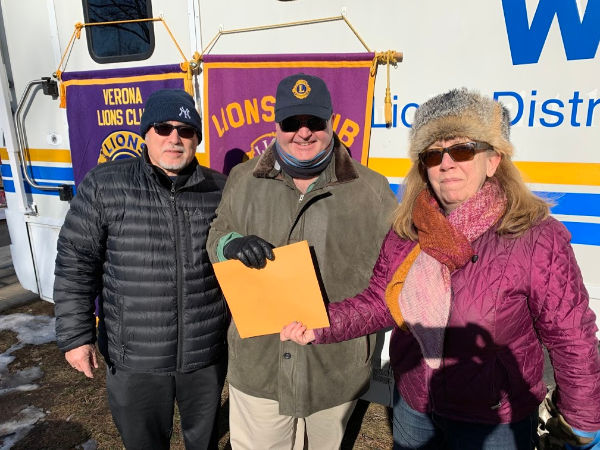 Today, at Fair in the Square, the Verona Lions Club presented the American Foundation for Suicide Prevention’s 2019 West Essex Walk to Fight Suicide with a $1,000 check to support suicide research and outreach efforts. Pictured above are Fred Sambataro and Don Cussen, respectively the Lions’ treasurer and president, with Virginia Citrano, one of the walk’s organizers.

This year’s AFSP Walk in Verona Park raised more than $100,000 and involved more than 600 walkers, who turned out on Sunday, October 20, despite a cold downpour. The first AFSP walk was held in Verona in 2017 after the deaths by suicide of two young Verona men, and have since raised more than $300,000.

These donations and those from other AFSP walks across the country have raised money for a wide range of research, including work on brain functions and the genetics of suicide, the best way to help teens hospitalized for a suicide attempt to re-enter school successfully and how access to lethal means affects suicide risk. In 2018 alone, AFSP invested $5.3 million in new research grants.

Support for AFSP has also made it possible to bring several free programs into Verona High School, the Verona Community Center, as well as AFSP’s signature “Talk Saves Lives” and a mental health “first aid” workshop. The walk’s goal for 2020 is to bring these programs to the other towns that sent teams to this year’s walk, including Maplewood and the Caldwells.