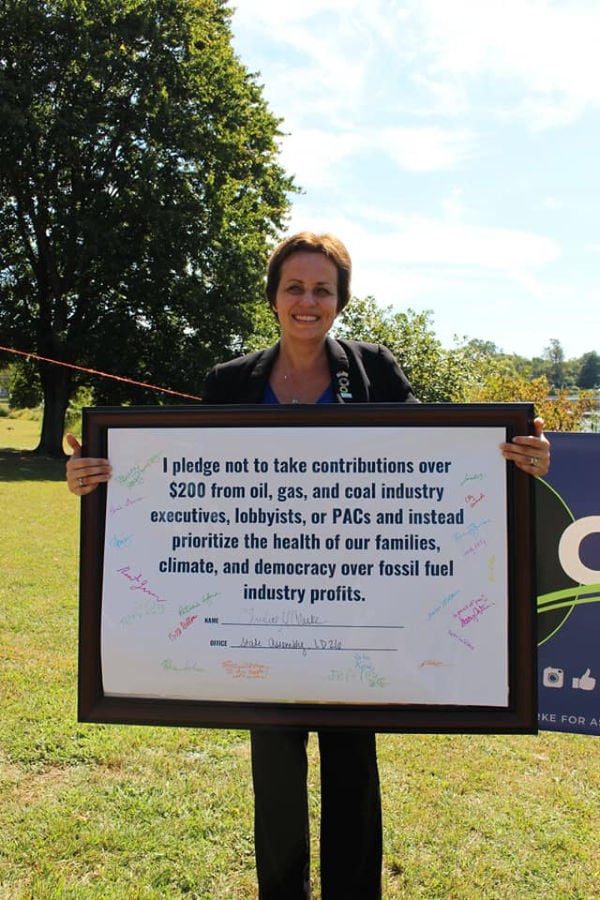 Christine Clarke, one of the two Democratic candidates for the state Assembly district that includes Verona, signed the No Fossil Fuel Money pledge last month to affirm her commitment to clean energy policies and generating renewable energy jobs for New Jersey, and had a photo taken of herself with the pledge placard.

Today, the campaign of Republican incumbent Jay Webber posted an altered version of Clarke’s photo on its Facebook page to attack her and Verona resident Laura Fortgang, the other Democratic challenger.

“Christine Clarke has been racking up major endorsements because of her good character, her genuine commitment to the issues and her track record of walking the talk in support of those commitments,” said Campaign Manager Benjamin Weisman in a prepared statement. “Meanwhile, Assemblyman Webber continues to lie to constituents and behave in a manner beneath the dignity of the office. We call on Assemblyman Webber and his campaign to immediately remove their false altered photo, correct the record and conduct themselves in a manner befitting the dignity of the office if they hope to earn voters’ support.”

Clarke is an environmental advocate, a grassroots organizer and mother of four who is running for State Assembly to advance clean energy jobs, protect clean air and water, improve healthcare, and legislate with empathy and fiscal responsibility. A first-time candidate, she has earned endorsements from organizations including the NJEA, AFL-CIO, Professional Firefighters Association of New Jersey, American Federation of Teachers, League of Conservation Voters, and New Jersey Sierra Club.

“To us it’s not surprising that Assemblyman Webber would use a bald-faced lie via Photoshop to detract from his truly dismal record on women’s rights, LGBTQ rights and the fact that he supported a federal  tax plan that has resulted in an 11% dip in property values across  his district,” said Elizabeth Juviler, Fortgang’s campaign manager. “His false frugality has lost his constituents real money in the equity in their homes. The voters can make their own decision between his sophomoric Facebook posts and his record.”

Webber, a Republican, has served in the New Jersey state Assembly since 2007. He was the Republican candidate for New Jersey’s 11th Congressional District in 2018 but lost to Democratic newcomer Mikie Sherrill. Unlike Clarke, Fortgang and fellow Republican incumbent BettyLou DeCroce, Webber has not thus far responded to MyVeronaNJ.com’s candidate question series.