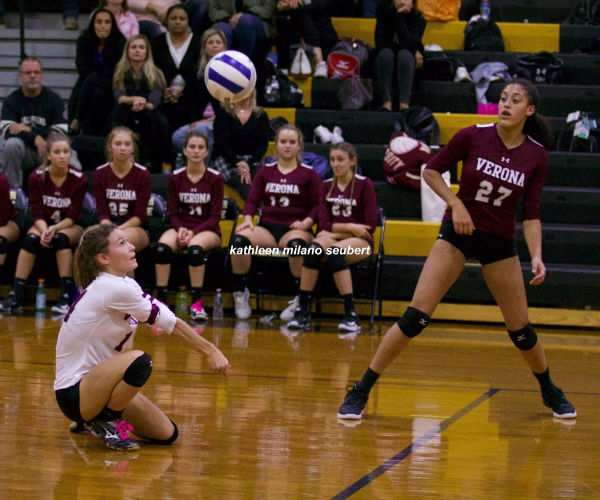 Their team colors are usually maroon and white or black and gold, but last night the big color for the Verona and Cedar Grove High School volleyball teams was pink. The two teams squared off in Cedar Grove for their annual Dig Pink fundraiser for breast cancer. Money raised at the game benefits the Minette’s Angels Foundation, a Verona charity that supports breast cancer patients and their families in many ways during and after treatment.

Which isn’t to say that there wasn’t a lot of good volleyball on view. Cedar Grove, which had a 10-13 record going into the game to Verona’s 16-6, edged out the Lady Hillbillies in a fast-paced first set 25-19. But Verona rebounded hard from that loss to deliver a punishing 25-5 second set.

The third set returned to the rhythm of the first, except that Verona held on this time for a 25-21 win. Kelly Waterman led Verona with 14 service points and 28 assists, while the lanky outside hitter Patricia Rakova, who is only a freshman, had 13 kills on the evening. Waterman also had 4 aces and Sinclaire Infusino, a junior, had 3.

There’s no rest for Verona today: The Hillbillies take on Millburn in the Essex County Tournament Semifinals at 5 p.m. That game will be played at Livingston High School.