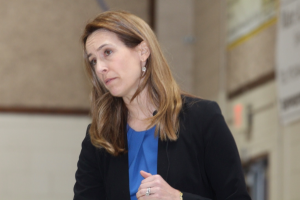 Since she began representing Verona in Congress early this year, Rep. Mikie Sherrill (D-NJ11) has steadfastly refused to endorse impeachment proceedings against President Donald Trump. After the release of the Mueller Report, the congresswoman acknowledged that it raised “serious questions related to the conduct of the president,” but called only for Congress to continue with its oversight and investigation.

The allegations that the president pressured Ukraine to investigate former Vice President Joe Biden and his son Hunter Biden appear to have been too much for Sherrill. On Monday evening, she issued a statement saying that “I think these accusations should be addressed with all of the tools at Congress’ disposal, including articles of impeachment.” She also joined with six other freshmen Democrats to write an op-ed published in The Washington Post that says that, “If these allegations are true, we believe that these actions represent an impeachable offense.”

Under U.S. law, the House of Representatives has the power to initiate impeachment proceedings against government officials, including the president, but the official is not removed from office unless he or she is convicted by the Senate after an impeachment trial.

This is Sherrill’s statement in full:

I began serving my country when I was 18 years old and entered the U.S. Naval Academy. Part of the mission of the Academy is to imbue Midshipmen “with the highest ideals of duty, honor and loyalty … to assume the highest responsibilities of command, citizenship and government.”

I try to follow the lessons I learned there. Lessons of service to my country and to my fellow citizens, being willing to make sacrifices and hard choices when necessary, and knowing that it is never enough to claim that I did something because I was ordered to — I always needed to ensure that what I was doing was just and legal.

I recently spoke to students who were considering attending a military service academy. I reminded them that they were signing up to a lifetime of service, and the Vietnam Veterans that served as the Color Guard that day reminded us all that our service to our community never really ends. When I finished my military service, I went to work as a federal prosecutor for the U.S. Attorney’s Office, and now I am continuing my service in Congress.

We are now faced with accusations from numerous sources that our President attempted to pressure a foreign government to investigate one of his rivals in the next presidential election. In other words, the President of the United States is attempting to “fix” the election.

I think these accusations should be addressed with all of the tools at Congress’ disposal, including articles of impeachment. I did not run for Congress to impeach the President. I ran to make the lives of New Jerseyans better. I will continue to work hard to get rid of the SALT cap, lower healthcare costs, and get shovels in the ground for the Portal Bridge and the Gateway Tunnel. But I have long said that Congress is a co-equal branch of government and has Constitutional oversight duties as well as duties to legislate for Americans. The President of the United States is threatening our national security. I believe it is my responsibility as a Member of Congress to ensure that I protect our country from any and all threats, and that is what I intend to do.