An Education Not Found In Textbooks 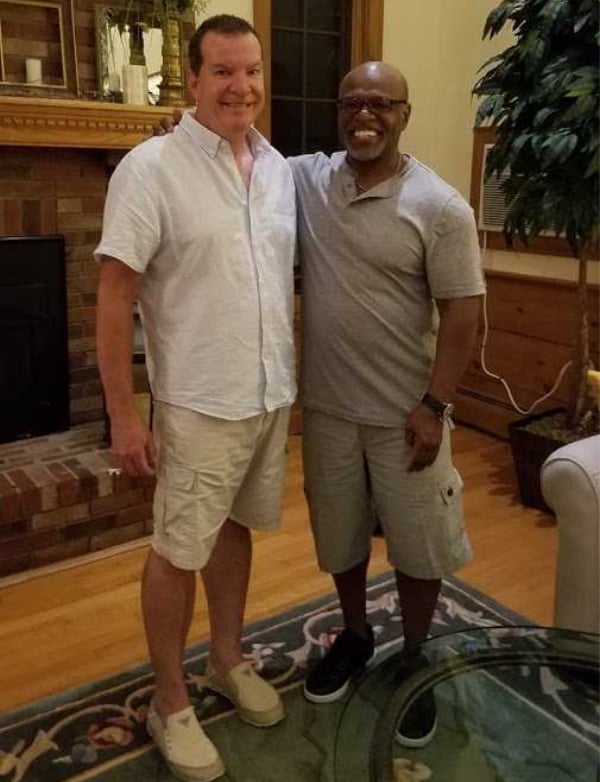 From the photo, you might think the two men were neighbors at a house party. If you were told one was a chief of police and the other a lawyer, you might think they were professional colleagues. In fact, they are lunch buddies from 50 years ago, a time when elementary school lunch in Verona got very complicated.

Christopher Brickell, left, is now the chief of police in Brandon, Vt., a small town mid-way between Brattleboro and Burlington. But five decades ago, he was a student at Forest Avenue school whose family hosted a student from Newark as part of the Verona Board of Education’s “sharing plan”. Carlton Smith, right, was that student. He’s now the assistant general counsel at Munich Reinsurance America. And amazingly enough, the two still get together for a meal, most recently at Brickell’s house in Vermont.

As MyVeronaNJ.com reported in May, in the 1968-69 school year, the Verona BOE invited 40 Newark elementary school students to attend our schools to ease overcrowding in Newark and show support for civil rights initiatives. The students were bused to Verona each morning at Newark’s expense but, because there was no lunch service in Verona’s schools, they had lunch at the homes of their Verona classmates. It was an experiment in education, but as Brickell and Smith recall it, the education wasn’t just about textbooks in a classroom.

That’s because the Brickell and Smith families made an effort to show their children more of each other’s lives. Brickell recalls visiting Smith’s relatives and going bowling with Smith’s family until late at night. Smith was at Brickell’s house when Brickell’s grandfather died and saw how the family processed its grief. But mostly, it was the small slices of life that we often don’t see as consequential. The Brickells ate dinner together, but Smith’s father worked two jobs and didn’t get home until after 10 p.m., making family dinner time all but impossible.

“I stayed over at Chris’ house and we went to the movies,” Smith recalls. “We went to the Verona movie theater and saw ‘Hello Down There’. There were no other black faces in the audience and I remember thinking, ‘How are the Brickells going to explain me?’ “

Explaining participation in the busing program was often difficult for Verona host families. The program split neighborhoods and congregations. Playdates disappeared, BOE members and program supporters were threatened and racism was never far from the surface. Smith doesn’t recall receiving any threats but he does recall not understanding why he had to get on a bus and go so far from his school, and why no one at his new school looked like him. “It was different from what I had grown up with,” he says.

The busing plan lasted only one year, and everyone went back to their previous lives. Smith’s family moved briefly to Montclair, and then to South Carolina. In a time before social media, connections were lost. As an adult, Smith found himself in Verona again, and was able to find Brickell’s house, but the Brickells had moved from Verona by then. Then about thirty years ago, Brickell also got the urge to reconnect. “I called every Carl Smith I could find,” he recalls. He eventually found the right one, and the two men and their families had dinner. A few months ago, Smith let Brickell know that he was coming up to Vermont, and they got together again.

Smith isn’t sure what impact his time in a Verona school had on his future, and he is careful to note that his memories of the time may not be the same as those of his classmates from Newark, which included his sister. But he does believe that it was beneficial. “If you place children in a positive environment, they will grow up positive,” he says. And he notes that, while his daughters were growing up, he made family dinners a priority, just as they had been in the Brickell household.

Smith says that if he could do the year over again, and could do it with the same family, he would. “I appreciate all that his family did and the impact it had on my life,” Smith says of the Brickells. But he believes that a better course for his Newark classmates would have been to improve their neighborhood school. “The perfect formula,” he says, “is to pump money into under-represented schools.”