How The National Anthem Was Signed — At Graduation 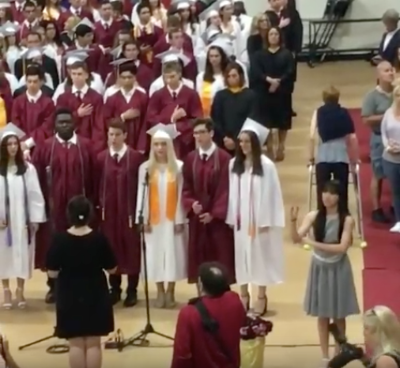 Guests at this year’s Verona High School graduation saw something very different. Not just a different graduating class and different speakers, but a different way of presenting the national anthem. This year, as the VHS choir sang, the anthem was signed in American Sign Language by four other VHS students.

The display was the work of Renata Curcio, a junior who this past year founded an American Sign Language club at VHS, her fellow juniors Mia Pego and Rebecca Wenzel-Rideout, and sophomore Breianna Magardino.

In an interview published in February in The Fairviewer, VHS’ student newspaper, Curcio explained why she started the club. “Since American Sign Language has been blossoming in the world as a true, legitimate language as well as a fascinating culture,” she said, “I felt obligated to help it have a part of VHS’s divergent culture.” According to the Fairviewer article, about 20 students joined the club, and they practiced both in school and at home.

The signers had at least one big fan in the audience on Thursday night: Andrea Dora Turco, who had come to graduation to celebrate her nephew, Anthony Zamloot. “It was a nice surprise to see four students signing the National Anthem,” she wrote on MyVeronaNJ.com’s Instagram page. “I’m deaf so I def appreciate this gesture. Not only deaf people appreciate ASL, but all people can benefit from learning this language as it would give anyone accessibility if they are losing hearing or cannot hear the speakers clearly. Well done job!”

Curcio said at graduation that the ASL Club will continue next year at VHS, and that members hope to bring in Joey Gebbia, the Verona resident who has been using social media to teach sign language. As MyVeronaNJ reported earlier this month, Gebbia grew up as the hearing child of deaf parents and is now on-call as a sign language interpreter at Saint Barnabas Hospital. He also speaks about deaf culture to ASL classes at Union County Community College and Kean University’s School of Communication Disorders and Deafness. “We really want to have him come speak to us,” Curcio said.

You can watch the work of the ASL Club in the video below: