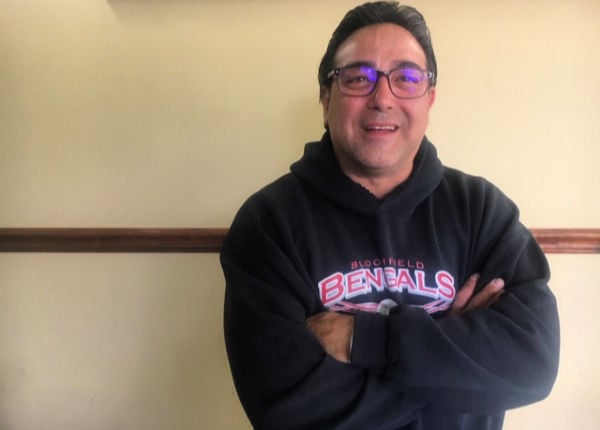 Most of us use Facebook and Instagram to connect with friends, brag about the kids (or a trip or a meal), or catch up on the news.

Joey Gebbia is using social media to teach. Just about every day, since early May, he has posted short video to teach a few words in American Sign Language. He’s covered the basics, like the alphabet, numbers, pets, and food and drink. He’s run through the signs for baseball teams that are near and dear. And the signs for Memorial Day and emergencies. If you wanted to sign your enthusiasm for “Game of Thrones,” he’s covered that and, in the video below, cleared up the potential for confusion between a dismissive Italian-American hand gesture and the ASL sign for “thank you”.

Gebbia comes by his signing skills naturally. His mother was deaf from birth and his father lost his hearing as a child. “I came out of the womb signing,” he says. Gebbia grew up, in the Bronx and later Bloomfield, deeply immersed in deaf culture, from a weekend deaf culture club to an all-deaf sleep-away camp. “It instilled tons of pride in me,” Gebbia says. “It didn’t matter what skin color you were or what religion. You were deaf first.”

While stationed in Cuba for the U.S. Navy, Gebbia got the call that would change his future. His mother was in the hospital and needed a liver transplant–and a way to communicate with her doctors. Gebbia flew home and stayed at his mother’s hospital bedside for a month, an ever-present interpreter and translator. He went on to become a certified English sign language interpreter who uses his skills in a variety of ways.

A resident of Verona since 2010, Gebbia is on-call as a sign language interpreter at Saint Barnabas Hospital, which he says is one of the few health systems that honor a request for an interpreter with a signer who stays at the patient’s bedside. The morning he sat down for coffee with this reporter, Gebbia was bleary-eyed from spending the entire night in Saint Barnabas’ emergency room. Most evenings, he handles interpretation calls for deaf people via video for Sorenson VRS. There are times when he is called in as a freelance interpreter when deaf people must see a doctor or have an appointment with government. He also often speaks about deaf culture to students in the American Sign Language program at Union County Community College and Kean University’s School of Communication Disorders and Deafness.

These are not Gebbia’s full-time job–that’s in telecommunications–and he notes that employment is often hard to come by now for deaf people. Gebbia’s father worked in union jobs for The New York Times and the Daily News, amid what was then very loud printing equipment. The U.S. Postal Service was once a large employer of the deaf as well. But there are far fewer of those jobs now: A 2016 report by the National Deaf Center found that 47% of deaf people are not in the workforce.

Gebbia doesn’t script his videos, which he usually records in his kitchen, wearing what seems to be an endless supply of baseball shirts and caps. And he admits to being pleased at the response that they have gotten, especially the people who are sending him clips of their efforts to learn the signs. “Did I do it right?”, they text.

Gebbia’s sign language videos are his commitment to community service, and a clear tribute to his mother, who has passed away. He recounts on his Facebook page that when he was a child, his mother told him about what it was like to grow up deaf in Japan during World War II, where she and her family could not hear the warnings to seek shelter from impending bombings. “Just sharing it now”, he wrote, “I can see her tears while she signed telling me all of this happened when she was my age.”