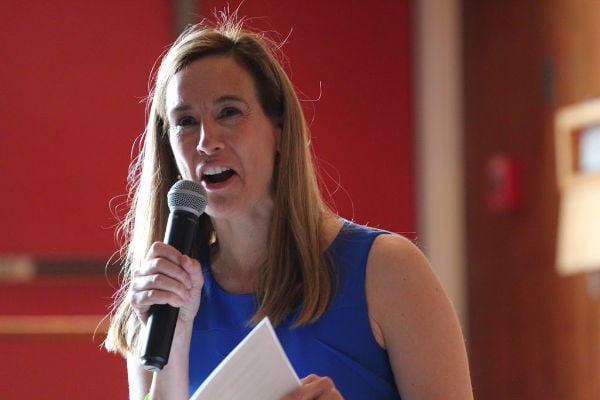 The questions ranged from SALT deductions to cannabis as Congresswoman Mikie Sherrill (D-NJ11) held her second town hall with her constituents. The crowd that gathered at Bloomfield Middle School was far smaller than Sherrill’s first town hall, which was the first in-person town hall in the 11th congressional district–the district that includes Verona–since 2013, but no less determined to pin their representative down on a wide range of issues.

There were no questions on the Mueller Report or impeachment among those that Sherrill fielded from online and in-person questioners, although one person wanted to know about what Congress was doing to prevent future Russian interference in our elections. Instead, questioners focused on healthcare, taxes, immigration, affordable housing, gun reform and the possibility of war with Iran. And near the end of the meeting, Sherrill gave a hint that House Speaker Nancy Pelosi might be readying legislation about reproductive healthcare in the wake of the anti-choice legislation passed in Alabama, Arkansas, Georgia, Kentucky, Mississippi, Missouri, Ohio and Utah.

Sherrill opened the meeting with a recap of some of her accomplishments so far, including her introduction of a bipartisan bill to raise the state and local tax (SALT) deduction cap. “We have been looking for any and every way to provide relief to our citizens,” she said. The Trump administration’s 2017 tax changes limited the SALT deduction to $10,000, and capped the deduction for married couples filing jointly at the same $10,000 cap as individuals. The bipartisan plan would raise the cap to $12,000 for individual filers, $18,000 for heads of households and $24,000 for joint filers.

The congresswoman also talked about her efforts to re-establish funding for infrastructure repairs in our area, including the Portal Bridge in Kearney and the Gateway Tunnel into New York’s Penn Station. “If the president wants to move forward [on infrastructure],” she said. “He should just release the funding for the Portal Bridge.” While $20 million in early stage work has been done on the bridge, the federal government has not released its share of funding for the next stage, which will cost about $1.5 billion. The bridge regularly gets stuck in an open position, which delays train travel on the Northeast Corridor. Sherrill said that she had sent administration officials a letter about the funding, but “the response was not helpful.”

Sherrill noted that resolving transportation issues is also part of the answer to another question she was asked: affordable housing. She indicated that even if Congress presses the Department of Housing and Urban Development on its new funding restrictions on affordable housing, getting people from their homes to their jobs will remain an issue. “We have to have a regional plan,” she said.

On healthcare, Sherrill said that she is waiting for the Congressional Budget Office to finish its analysis of the cost of Medicare-for-all before she takes a position on it. She noted that, while many constituents like the healthcare that they get from their employers, some have stayed in bad jobs just for the coverage. The question for healthcare reform, she said is, “how can we take the best parts of our system and fix the rest?”

On immigration, Sherrill reiterated her calls for comprehensive immigration reform and her opposition to a wall on the southern border of the U.S. She said that America must increase its aid to Guatemala, Honduras and El Salvador, not for nation-building, but to reduce gang violence. “There is a reason why people are taking their families and going on an arduous journey to our border,” she said. Sherrill also said that she is fighting to get more money directed to drug interdiction efforts at the border and at ports, and told the audience that she had been in a meeting with the U.S. Secretary of Agriculture, who asked for immigration reform because farmers need more workers.

On the potential for war with Iran, the U.S. Navy veteran said that she is concerned, not least of which because the lack of a fully staffed State Department and frayed relations with allies mean that the U.S. does not have the diplomatic channels that it should have to resolve conflict. “I don’t think the president wants to go to war, but I don’t think we have the tools to walk it back,” she said.

Sherrill took a question on gun violence from Verona’s Christine McGrath, who is the local group co-leader of the gun reform group Moms Demand Action, but before answering took a moment to congratulate McGrath on her recent election to Town Council. Sherrill reminded the audience that her first legislative co-sponsorship was H.R. 8, the bipartisan universal background check bill. She noted, ruefully, that although the bill passed the House, the Senate has not indicated when–or if–it will take action on it. Sherrill noted that there was bipartisan support of the Violence Against Women Reauthorization Act, which includes a provision banning those convicted in domestic abuse from acquiring a gun, but said there was much more work to be done. Students should not have to stop school shootings, Sherrill added. “That is not a position that any of our children should be in.”

The meeting was live-streamed on Facebook and you can watch it in full below :