When Verona Dared To Be Different

Facebook
Twitter
Pinterest
WhatsApp
- Advertisement -
Verona has experimented with many aspects of its school system over the years. We’ve changed the way we teach reading and math. We’ve expanded the science curriculum to encompass technology and engineering. We’ve added–and subtracted–instruction in languages other than English. But no experiment in education was more daring than the one that ended 50 years ago next month.

In the 1968-69 school year, Verona invited 40 Newark elementary school students to attend our schools to ease overcrowding in the underperforming Newark school district. Verona’s schools did deliver a better education to those 40 students that year, through an experiment that showed the best–and often worst–of Verona’s attitude towards the world. Residents acted locally on a commitment to improve civil rights, but racism flared into the open and neighborhoods and congregations split over whether it was Verona’s responsibility to fix problems beyond our borders. Adult friendships frayed, school friends grew distant and the Board of Education members that implemented the program received credible death threats.

Hilda Jaffe remembers it all as if it were yesterday. She is 96 now and lives in Manhattan, where she gives guided tours of the New York Public Library’s iconic main branch. But in 1968-69, Jaffe was the president of the BOE.

“It all sounded so logical,” she says of the busing program. “How could anybody have been against it?”

The logic of the busing program did seem straightforward to its proponents. In July 1967, riots broke out in Newark after two white police officers arrested and beat a black motorist. Life in Newark felt bleak thanks to a steady march of jobs and white residents to Essex County’s suburbs. Corrupt and inept officials had mismanaged Newark’s government and its school system, leaving it with 10,000 fewer student seats than it needed.

On April 4, 1968, Dr. Martin Luther King Jr. was killed in Memphis. Three days later, there was a march of solidarity in Newark that drew 25,000 people. More than a few of them were from Verona, including Joe Thomas. A parishioner at Our Lady of the Lake, he was also editor of The Advocate, a Catholic newspaper, and had been involved in improving inter-religious, and inter-racial relations in our area. “There was a call that went out for understanding,” he recalls of the Newark march, and he answered it. So did several Verona clergy leaders and the vice president of the BOE, John McDonald, who brought an idea back to the board.

On April 30, 1968, the BOE unveiled what it called “the sharing plan”. Verona had a small number of unfilled seats in its elementary schools. Newark parents would volunteer their children to participate and Newark’s BOE would pay for the busing. Since Verona schools didn’t have lunch services at the time, Verona families would volunteer to host them at noon. (This reporter’s family was eventually among them.) The Educational Testing Service would document the Newark students’ proficiency at the beginning of the school year and at the end.

Reaction to the plan was swift–and stunning. On May 13, 1968, some 1,800 people packed Verona High School for a meeting.They filled the auditorium, the “old” gym (there was no new gym at the time) and spilled out into Sampson Drive. And many would soon find themselves split into one of two groups–supporters of the plan or those who tried to block it through legal action. “The stuff hit the fan,” Jaffe says succinctly.

BOE members faced series of heated meetings, and more. Richard Heaslip, who served on the BOE with Jaffe, wrote an autobiography before he died last year at 94 that detailed some of the strife. His wife Marie was accosted at the Verona Pool. “You better tell your husband to straighten up if he doesn’t want trouble,” she was told. Heaslip himself was confronted outside one of Verona’s schools. [He] “told me if I don’t straighten up he would ‘take me apart like a clock’,” Heaslip wrote. Heaslip filed a complaint about the incident and when he went to Verona’s municipal court, the threat-maker was there at the entrance with a large friend for extra intimidation. Thankfully, the judge took a dim view of town officials being threatened.

Jaffe also received death threats, by phone and by letter. “I was so tense,” she recalled of one community meeting, “that when I got home my muscles ached.”

She still seems to ache from how the board’s intentions came to be mischaracterized. While some residents viewed the BOE’s decision as rash, it had actually studied several of the so-called city-to-suburbs school programs elsewhere in the country and had formed an idea of what could work in Verona. Jaffe participated in a state school board association to learn general best practices, but some residents decided it was a move to regionalize Verona schools and bring more black students in. 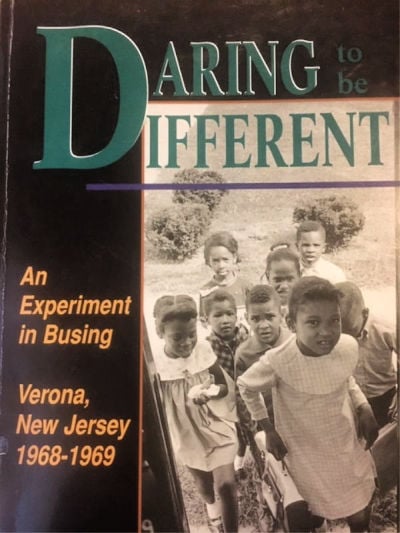 The turmoil is amply documented in Daring To Be Different, a history published by the late Verona resident Kurt Landsberger in 2001, that is available in the Verona Public Library. Landsberger wrote openly about the racism that surfaced in Verona in 1968-69, and the efforts to portray opposition to the plan as justifiable concern for Verona students. Before his death in 2014, Landsberger was invited to lead a symposium on the busing program for VHS students and parents. Robert Maher, a VHS history teacher, recalls how many students seemed astonished by what had happened in their town. “It was a divisive moment in the community but also very commendable,” Maher says.

Though Jaffe’s BOE survived the legal challenges to its efforts, it did not survive the February 1969 vote on the school budget driven by busing opponents determined to financially starve the board into submission. The board’s pro-busing majority fell apart with the election of a leader from the opposition group. In June, the BOE announced that higher enrollment for the 1969-1970 school year would leave it without enough seats to continue the busing program.

Newark students made it through the 1968-69 school year in Verona without harm, and ETS found improvement in test scores. Jaffe was given an award from a group of Essex County educators, but no other district in the county–or elsewhere in New Jersey–followed Verona’s lead. Families who had hosted Newark school children at lunch created a summer camp program for Newark children in Verona Park that continued for several years, and VHS students created lasting tutoring and collaboration programs with Newark students, as well as a holiday toy drive. State officials didn’t fully address the problems in Newark’s schools until 1995, but by 2017 they were deemed sufficiently improved to return to local control.

Jaffe says that, despite the hardships that she endured for championing the busing program, she would “definitely” do it all again, though perhaps take a bit more time to build community consensus. “Why should we be concerned with these children?” she recalls being asked. Her answer then was the same as it would be now. “Because they are growing up with my children and because I want the world of my children to be a better world.”