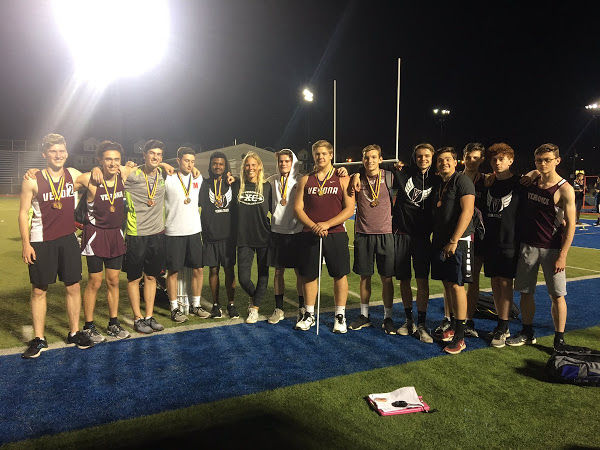 It was blowout win for Verona High School boys track at the Super Essex Conference Championships yesterday–and a come-from-behind victory for VHS girls track, too.

The boys finished the meet with 162 points, almost double that of the second-place team. Isaac Skrivanic is the SEC Colonial Division champion in both shot put and javelin, and Skrivanic also placed and medaled in discus. Mike Maglione captured first in both the 1600 meter and 3200m races, while Vincent Hogan is the 400m hurdle champion and Owen Fogarty got the big win in pole vault, clearing 13 feet.

Chris Robinson took third in both the 400 hurdles and the 800m, and also lead the 4×400 team (Robinson, Navarro, Rosenzweig and Vincent Hogan) to a third-place finish. Griffin Jordan placed third in both javelin and discus, and threw a personal best in shot put. Cole Martin got third place in pole vault, and Sean Carney finished third in both the 1600m and the 3200m.

Rounding out the win for the Verona boys was Harry Mastrogiannis with a fourth place finish in the 3200m, Dwayne Lawson with a fifth place in shot put, and Joey Visone with sixth place in both high jump and long jump.

“Each and every boy that competed came to win this championship meet, they left nothing behind and gave everything they had!” cheered Coach Laura Palmerezzi by email. “This win was pure TEAMWORK! Throwers, jumpers, and runners all came together to get this win and become the SEC Colonial Division Champions! There were many personal bests too! We took home 30 medals in the process! I am such a proud coach right now!” 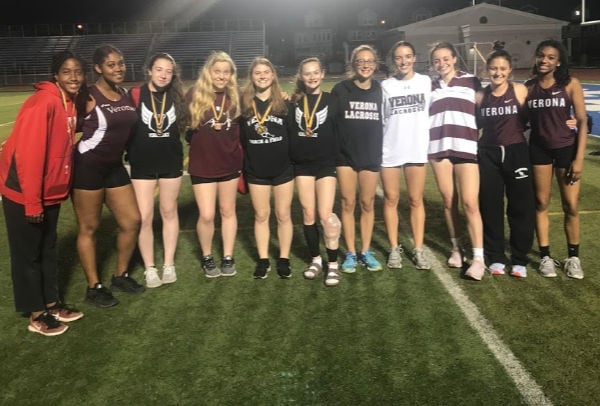 As the meet neared its end, it didn’t seem that VHS would go home double champions. The girls track & field team was in second place to Caldwell, 95.5-84, in a field of nine teams with only the discus and long jump remaining. Then the Verona girls in discus gathered 16 total points, with freshman Aimee Griffin getting second (84’), followed by Gillian O’Donnell (79’6”) and Gigi Petti (77’11”) in fourth and fifth place respectively. Chelsea Gruskin ended the night at Newark Schools Stadium by winning long jump with an incredible jump of 17’ 2 1/2” to secure the third consecutive SEC track & field championship for Verona’s girls.

In the other field events, Verona swept the pole vault. Erin Petrino won first with a height of 9’7”, Lily Benanchietti was second with 8’6” and Rebecca Katsios was third at 7’6”. Gillian O’Donnell took first in javelin with a throw of 104’2”.

- Advertisement -
Previous articleA Prayer For Mothers
Next articleLetter: John Q Gets It