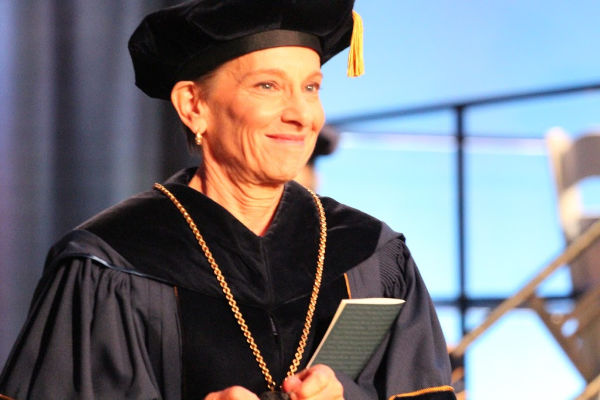 The College of New Jersey (TCNJ) formally installed its 16th president, Kathryn A. Foster, in a tradition-filled ceremony on Friday afternoon, May 3.

Foster, who grew up in Verona and graduated Verona High School with the class of 1975, spoke before an audience of more than 700 people about the rich traditions of TCNJ, its present strengths and its potential future. “I cannot wait to plan with you, to explore where we have been, where we are, and where we are going,” she said. “Here’s to three tenses at once, in our time, in this place, for tradition, for tomorrow, for TCNJ.”

“We bring personal connections and shared experiences,” Foster added, “a tenacity to take on big projects that make a difference, an ethos that values engagement, ideas, and one another, and a character that is honest, motivated, considerate, and ambitious.”

Foster, who was known as Kate in Verona, was named TCNJ’s president on March 27, 2018 and officially began her tenure on July 1, 2018. Her audience included her sister, Meg Foster Slotkin and her brother Andy Foster; and her cousins Rob and John Schaffer, who all grew up in Verona, as well as her nieces Sarah and Rebecca Slotkin, also both VHS graduates, as well as many other family members and friends.

The ceremony featured remarks by TCNJ faculty and students, and local, state, and academic communities. Foster had earned her doctorate at Princeton’s Woodrow Wilson School for Public and International Affairs, and Princeton University President Christopher L. Eisgruber noted that her award-winning dissertation was later published by Georgetown University Press. “In Kate, TCNJ has found something truly special, a leader who exemplifies this institution’s values as an accomplished scholar, a dedicated teacher, and a tireless advocate for public education,” Eisgruber said.

And there was one big surprise for Foster at the end of the ceremony. She has a goal of visiting all 50 state capitals in the United States and while TCNJ isn’t far up the road from Trenton, TCNJ wanted to make sure Foster has a regular view of the state capital. The college’s Board of Trustees presented her with a painting of the New Jersey Statehouse by Eleanor Voorhees, a Lambertville, N.J. artist whose work has been featured in national publications as well as galleries and private collections throughout the region. 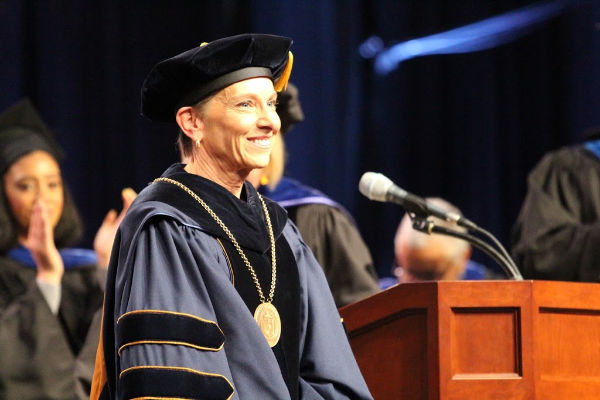