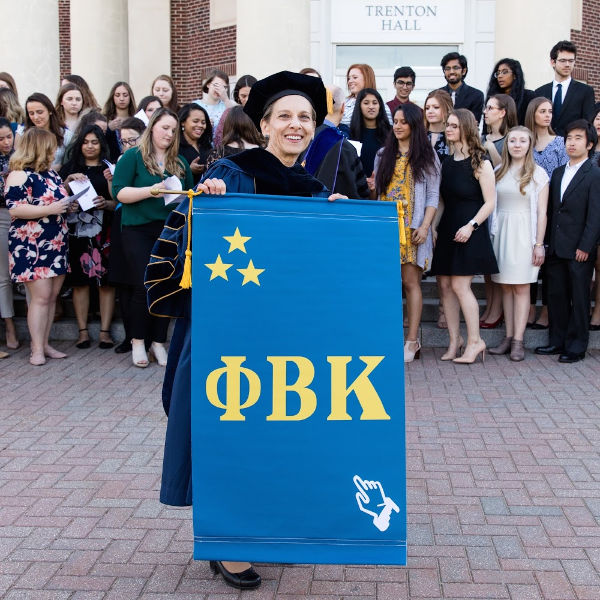 TCNJ President Kathryn Foster was inducted into Phi Beta Kappa as an honorary member of the Delta Chapter of The College of New Jersey at a ceremony on Wednesday, April 24. Foster, a 1975 graduate of Verona High School who was named the 16th president of TCNJ in March 2018, was honored alongside 77 students and TCNJ Professor of Psychology Jarret Crawford, who was inducted as an alumni member.

“I am honored to be an inductee into Phi Beta Kappa, the nation’s oldest and most celebrated academic honor society,” Foster said. “I am particularly honored to be joining the Delta Chapter of New Jersey at The College of New Jersey, an institution known for its academic rigor and exceptional educational quality, an institution that I and others have long admired from afar, and one I have come to respect even more since becoming president here last July.”

Founded in 1776, Phi Beta Kappa is the nation’s oldest and most widely recognized academic honor society. Fewer than ten percent of the baccalaureate-granting colleges and universities in the United States have the privilege of sheltering a chapter. In New Jersey, TCNJ is one of only four institutions to earn this distinction.

Photo by Andrew Cislak via TCNJ.