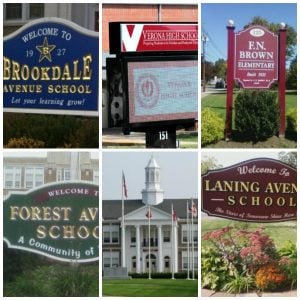 The Verona Board of Education met on Tuesday, April 9, and moved closer to establishing a final total for the capital improvements referendum that it intends to submit to voters this November. The BOE also revealed that is has been in talks with Verona’s municipal government about capturing more revenue from properties that pay a payment-in-lieu-of-taxes (PILOT) rather than traditional property taxes and that the school’s budget position has improved enough that the district will be able to add back some of the staffing that had to be cut for the 2018-2019 school year.

On the referendum, Superintendent Dr. Rui Dionisio said that the work needed at Verona’s six schools now is in the range of $27 million to $30 million, but stressed that this will not be the price tag for the referendum. “We’re still looking at how we get this down to be more reasonable for the taxpayers,” Dionisio said. “We don’t anticipate that this will be the number that goes out the the public.” (Verona’s last school improvements referendum was in 2014 and cost $13.8 million after state aid.)

The referendum could spend $7 million on several new school roofs, and $3 million is needed for safer rigging on school stages. There could also be funding for a new gym floor at Verona High School, and remediation of a deteriorating facade at H.B. Whitehorne Middle School and its track. It could also cover upgrades to the locker rooms at VHS and HBW, and to the phone systems at all schools except VHS. Dionisio said that while the BOE has discussed adding solar panels to school roofs, this would likely not be included in the referendum because it is not now cost effective, in part because the roofs would not be able to support solar panels without significant structural upgrades. The referendum could also include $5.5 million for school air conditioning, but Dionisio said the Board wants to have some community input on whether this is something that is warranted.

Dionisio said that he hopes to have a firm list of everything that will be in the referendum by the end of April, and that there will be a public presentation in May. BOE President Lisa Freschi said that all five board members have a “very detailed” binder on potential referendum items, and urged the public to direct questions to BOE members. “Approach us,” she said, “it’s very important to be informed.”

PILOT payments have been a point of discussion–and often contention–between the BOE and town government for several years because they can result in less revenue for schools while new developments add students to the school system. While Verona schools get 55% of normal property tax revenues, they get nothing from the value of property improvements under PILOTs because almost everything goes to town government. (PILOTs send just 5% of the improved value of a property to Essex County, instead of 20% of traditional property taxes.) The BOE still, however, gets its normal share of the land tax.

Dionisio said that he and Freschi met with Township Manager Matt Cavallo and Mayor Kevin Ryan on March 19 to talk about the PILOTs, and said there was “good constructive dialogue”. Dionisio said that is important because of the potential for new housing developments in Verona that would operate under a PILOT agreement and bring many more students into the district. “The impact that that could have on our school district is concerning,” said Dionisio. “Our schools are at capacity.”

Verona, like other New Jersey municipalities, has come under increased pressed to add affordable housing since former Gov. Chris Christie abandoned the Council on Affordable Housing (COAH) and New Jersey’s state legislature failed to create a replacement. Last December, the Town Council approved an ordinance to buy the former Cameco property for low density affordable housing. The Council is also in talks with developers looking to build 300 apartments on the Spectrum360 property on Sunset Avenue, and faces additional development at the edge of Eagle Rock Reservation and a privately owned lot that had been used as the town leaf dump.

Dionisio said that there are roughly a dozen students now living in PILOT properties, most of which at the Hilltop; one student lives in the Annin Lofts buildings. He said the district is still determining how many students, if any, live in the Verona Place apartments.

At the meeting with town officials, Dionisio and Freschi suggested that the BOE get a stipend from PILOT revenues for each new student coming from a PILOT building. “It was heard with open ears,” said Freschi, “and we’re going to go talk to the full Council.” Dionisio noted that when an elementary school grade gets so large that it must be split into an additional class, it costs the district $75,000 in salary and benefits. The BOE approved a resolution last year that students in PILOT buildings could be assigned to other elementary schools, if it would have an impact on class size. BOE member Jim Day encouraged residents to ask the five candidates now running for Town Council whether they supported giving PILOT money to the schools.

The BOE also said that the 2019-2020 school budget could restore funding for several positions that were cut last year. The budget will bring Mandarin instruction at VHS and HBW back up to 100%, increase HBW French to 100% and raise VHS graphics to 100% to meet the high demand for that program. Verona will add kindergarten teachers at Forest and F.N. Brown, a special education teacher at VHS and give stipends to several teachers for additional classes. The budget will not restore the elementary school technology facilitators, which Dionisio said were no longer needed because teachers have integrated technology into their lessons. The BOE will vote on the budget at its April 23 meeting.

The BOE meeting also included a presentation on the VHS Capstone senior internship program, which will include nearly all of the class of 2019 this year. You can watch the meeting in full below.