Looking Back On Basketball Season 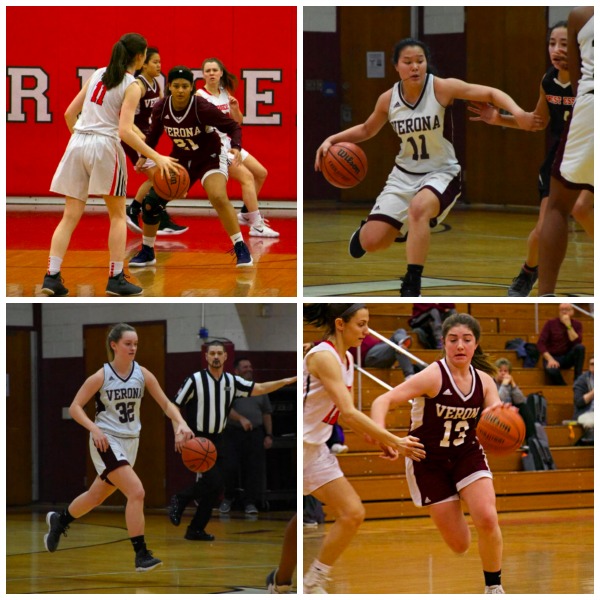 Verona High School’s basketball season ended early this year, with both the boys and the girls teams knocked out by first-round NJSIAA playoff losses. But that doesn’t mean that the teams didn’t have their strengths. Here are some highlights:

The girls team finished the season with a 17-7 record and were 10-2 in conference, including a tie for conference championship with Glen Ridge. Senior Desiree Meyer led the team in three-pointers and fell just 13 points short of a career 1,000. She played most games in the double digits, including a 24-point game against Orange that ended in a 53-23 Verona blowout. Fellow senior Brianna Horton finished out her 759-point career as she started it, excelling in every aspect of the game. When Verona beat Caldwell in the holiday tournament, 18 points of the win were thanks to Horton, and she was named tournament MVP.

“I feel my girls worked hard,” said Jessica Del Vecchio, coach of the girls team. “The girls had a phenomenal season and I am very proud of all of their efforts. This season we had 17 wins, we won a conference title, and the Holiday Tournament for the second year in a row.”

“They gave it their best shot, Del Vecchio added. “There is nothing for them to be upset about. It is sad to see the season come to end.”

And there are plenty of reasons to look ahead. Kylee Gallagher, who lead Verona in field goals this year with 60 and a total of 141 points on the season, is only a junior. Melanie Naeris, now a sophomore, delivered 58 field goals and 154 points–and several spectacular steals and rebounds. Cayla Okafor, another sophomore, played in 17 of Verona’s 24 games and earned 117 rebounds for her efforts. Lauren Kobernick, a freshman, had 67 points in her debut varsity season and got court time in almost every game. Fellow freshman Nia Chesney gave hints that she might be a three-pointer leader in the future.

“We will truly miss our seniors,” Del Vecchio said. “The seniors provided tremendous leadership this season. They have left their mark on this program and we are forever grateful to them for everything they brought to this team over the past four years.” 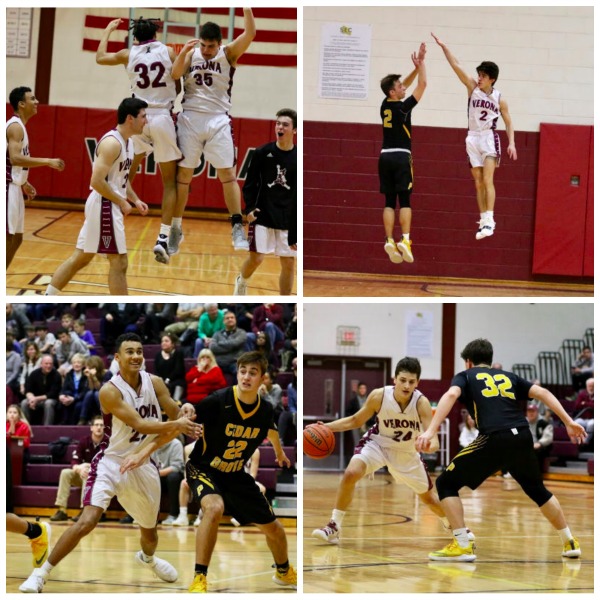 The boys team finished the season with a 16-10 record and they were 9-5 in a very competitive conference, good enough for second place. Verona’s overall record enabled the boys to qualify for the state tournament for the 12th year in a row. Among the victories were three wins over rival Cedar Grove: a 34-28 win as a season opener, a 66-43 blowout in January and a tighter 47-42 victory in February.

“It was a very good year,” said Eric McElroy, coach of the boys team.

Verona’s stats drive home the point. Nick Gonzalez, who will likely be returning to the team next year, led the Hillbillies in field goals and three-pointers, for a stunning 241 points on the season. Kyle Malanga was also a standout, with 174 points and a steady hand on the free throw line. The second-year varsity starter delivered 20 of Verona’s in its final win over Cedar Grove, and 12 of them were from the free-throw line. With strong fellow players like Pierce Coppola, Derek Jocelyn, Andrew Emanuilidis, Jake McConnachie and others with high school years still ahead of them, the Hillbillies are well-positioned for the future.

Ironically, one of the biggest struggles the boys basketball team faced this year was just to play its Senior Night game. After two snow cancellations, the boys finally squared off against Newark Collegiate, and they captured the win at the buzzer.