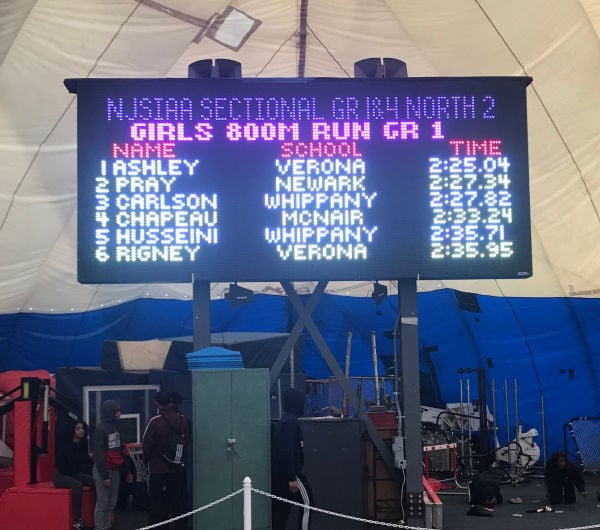 Verona High School will be sending a large contingent of winter track athletes to the state Group championship later this month after Veronans had very strong finishes in the state Sectional Championship in Toms River on Sunday.

Kate Ashley led the way for the girls team, winning both the 400- and 800-meter races and anchoring VHS’ third place finish in the 4 x 400m relay. The Verona girls finished third overall at Sectionals, and will send nine competitors to Groups on Friday, February 15.

On the boys side, Isaac Skrivanic became the North 2 Group 1 State Sectional champion in the shot put, throwing 47’8, while Owen Fogarty took first in pole vault, clearing 13’3. The boys team finished fourth overall and will be sending seven competitors to Groups. 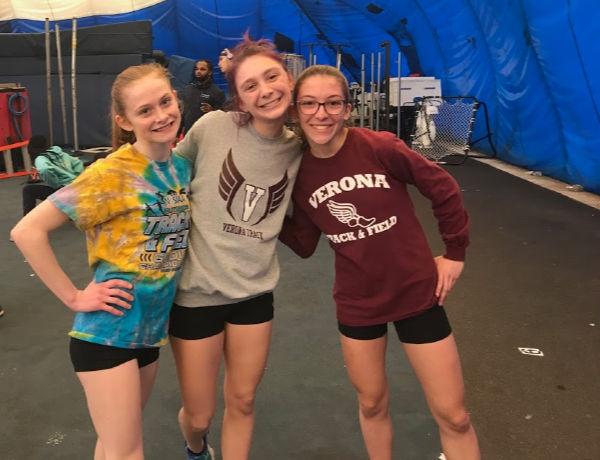 In addition to Kate Ashley’s first place finishes in the 400m and 800m, Bridget O’Donnell took second in the 3200m and Lily Benanchietti took second in pole vault. The team of Alex DeVivo, Brianna Rigney, Clara Frizzi and Kate Ashley took third in the 4 x 400m relay, and VHS’ Francesca Esposito and Rebecca Katsios tied for fifth place in pole vault. The Verona girls also had three sixth place finishes that were good enough to advance the athletes to Groups: Brianna Rigney in the 800m, Bridget O’Donnell in the 1600m and Julia DiGeronimo in the 3200m.

Julia DiGeronimo and Karina Squilanti also competed in the 1600m, Veronica Valera was in the 3200m, Clara Frizzi ran in the 800m and Alex DeVivo was in the 400m, while Karen Andre competed in high jump, and Jenna DaRin and Gabriella Petti comepted in shot put.

On the boys side, Aidan Murphy was the first to advance to Groups after taking fourth in the 400 meters. Mike Maglione took second in the mile, running a 4:41.36, and also finished in third place in the 3200m. He will compete in both of these in Groups.

David Navarro will be competing in three events at Groups, after he placed sixth in the mile, fifth in the 800m and, along with Vincent Hogan, Bryan McKeen, and Aidan Murphy was part of the 4×400 relay team that placed fourth.