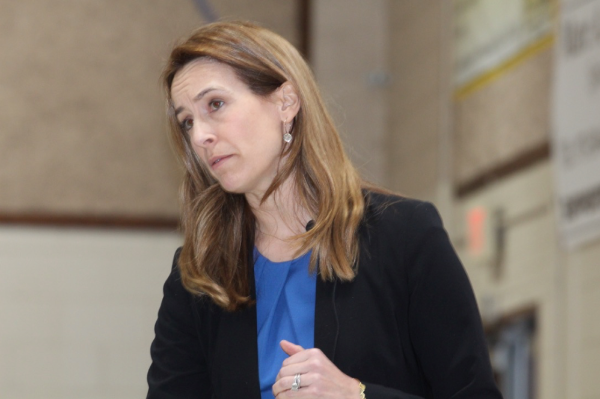 Congresswoman Mikie Sherrill (D-NJ11) kicked off a new era in government today, holding her first town hall, a gathering that was also the first in-person town hall in the 11th congressional district since 2013. Sherrill fielded more than three dozen, wide-ranging questions over the course of the two-hour meeting, which was held at the Police Athletic League building in Parsippany.

The meeting opened with a re-enactment of Sherrill’s swearing-in ceremony and the congresswoman talked briefly about her committee assignments in the House of Representatives–Armed Services and the Committee on Science, Space and Technology–and about why she has joined the Blue Dog Coalition, a group of centrist Democrats that has drawn ire in some quarters for previous positions that were seen as undermining Obamacare. Sherrill said that it was important for her to join the coalition because one-quarter of its membership is now from New York and New Jersey, which she believes will make it a key influencer on local infrastructure projects like the Gateway tunnel. She also hailed Blue Dog for its involvement in a bipartisan effort that spanned both the House and Senate to end the federal government shutdown. She told the audience that, while she had voted against Nancy Pelosi for House speaker earlier this month, she was now confident that the Democrats had created a pathway to bring younger members into leadership positions. “We are growing the bench,” she said, before adding that “Speaker Pelosi has shown that Congress is a co-equal branch of government.”

There were several questions on the shutdown during the town hall, as well as questions on healthcare, defense spending and priorities, tax and immigration reform, the green economy, veterans affairs, trade tariffs, regime change in Venzuela, community policing and criminal justice reform, as well as President Donald Trump’s border wall and Rep. Alexandria Ocasio-Cortez. She fielded a question on ending the divisiveness in government from a Whippany Park High School student who said he had volunteered for the congressional campaign of Sherrill’s opponent, Assemblyman Jay Webber. Sherrill, who once served as a U.S. Navy helicopter pilot, responded that she has already been working with veterans on the Republican side of the House. “I have differences [with them]”, she said, “but there are a lot of issues we have agreement on.” An even younger student wanted to know what Sherrill would do to keep kids safe in school, and she pointed to her support for common-sense gun reform and measures that would address the opioid crisis.

Asked about her support for renewable energy, Rep. Sherrill said the country needed a focused plan for a green economy, but said that without subsidies for nuclear power–something that has drawn opposition in New Jersey–the country “would have to move back to dirty power.” She noted that New Jersey is in a good position to be a leader in green energy because Rep. Frank Pallone (D-NJ6) is the new chair of the House Energy and Commerce Committee.

Sherrill also countered a request that she immediately support Medicare-for-all, a question that drew applause from many in the capacity crowd of 400 people. Instead, the congresswoman said she supports first asking the Congressional Budget Office to draw up an independent report on how Medicare-for-all would function and how it would be paid for because there is now only one study on the subject, a George Mason University report funded by the Koch brothers. Sherrill said she wants to make sure that a Medicare-for-all plan would protect the jobs in the current healthcare system, as well as the ability of New Jersey’s pharmaceutical industry to produce new medicines.

Sherrill said that reinstating property tax deductions lost in the Trump tax plan is a priority, as is passing real tax reform because tax revenues collected in New Jersey  are now paying for bridges and roads elsewhere in America. Sherrill also said that she supports measures to preclude federal government shutdowns in the future, by either party. “Shutdowns are becoming more egregious and more frequent,” she said. “This is no way to run a government.”

The congresswoman expressed support for immigration reform including new rules on asylum, and modern border security that would involve an increase in border agents and towers, as well as new technology like drone surveillance.

The meeting was live-streamed on Rep. Sherrill’s Facebook pagehttps://www.facebook.com/RepMikieSherrill/, and you can watch it here.