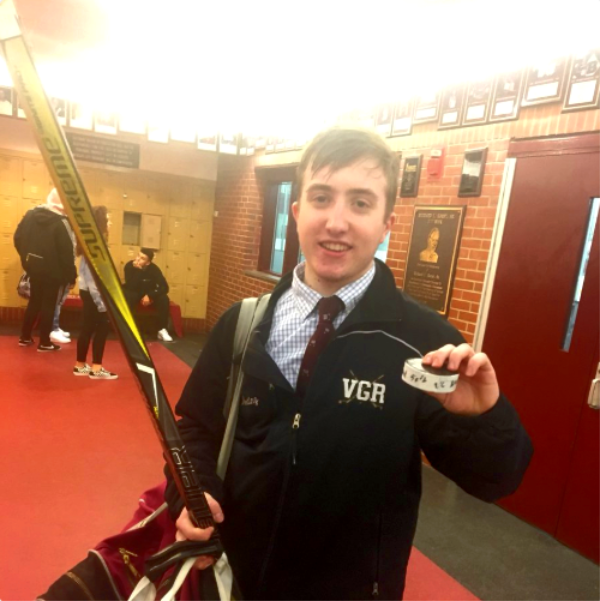 There was a big milestone on ice last week for one Verona-Glen Ridge hockey team member: When VGR beat Bayonne 8-2 on January 18, Verona High School senior Jarrod Keating scored his 50th goal. He actually scored his 45th through his 50th goals that evening, because Keating was responsible for six of VGR’s eight points.

And with that, Keating joined a very exclusive club. He becomes only the third VHS player to have reached the 50-goal mark since the combined schools’ hockey team was created more than 30 years ago. Chris Bellino scored his 50th in the 1993-94 season and Dylan DeCandia did in 2013-2014.

“Fifty goals is a pretty big achievement,” says VGR Coach Ken Lilien. “A lot of things have to go right for you to achieve that goal. You have to be good enough to play as a freshman, stay healthy and chip away at it.”

Which is exactly what Keating, a four-year varsity starter for VGR, has done. A steady contributor to VGR’s wins, he has been on a tear this season. Keating had five of VGR’s eight goals in the January 6 win over Arthur L. Johnson High School, earning him the team’s coveted Bloomfield hat, the team’s MVP award. When VGR skated to a 2-2 tie with Millburn on January 12, Keating scored both goals. He also had a goal and an assist in the 4-4 tie with Kinnelon on January 14.

Jarrod Keating, who shares the ice with his twin brother Harrison, started skating at 3 1/2 and played for the Montclair Blues from first grade through his junior year of high school. He was a member of the 2016 VGR McInnis Cup championship team, and has been a captain of VGR for two years, as well as a captain of the VHS boys lacrosse team. A National Honor Society inductee, Jarrod Keating is also a member of the Verona Rescue Squad. He will be attending Penn State this fall and may play club hockey there.

But the season isn’t over yet and Keating has another hockey milestone within reach–100 career points, which is a tally of both individual goals and assists. Keating was at 88 as of this past weekend. VGR is 9-4-4 on the season.

You can see both Keatings in action in two VGR games this week. On Wednesday, the team plays Passaic Valley at 4:15 p.m. at the Codey Arena in West Orange, and Saturday is hockey’s Senior Night. The team will square off against West Essex at Codey and the puck drops at 5:45 p.m. In addition to Jarrod and Harrison Keating, the team’s seniors include Colin Welsh from Verona and Andrew Martell from Glen Ridge.

- Advertisement -
Previous articleThe Week Ahead: Jan. 21-26, 2019
Next articleFarrell Gets Basketball Honor At College