Robert Merkler, Verona’s director of athletics and special programs presented the high points of Verona High School’s fall 2018 sports season to the Board of Education on Tuesday, January 8.

Merkler noted that while boys cross country finished with a 3-6 dual meet record, they were third overall at the Greystone Invitational in Small Schools Division and placed fifth in the section in order to qualify for the Group 2 Championships. David Navarro was named 2nd team All Division, while Chris Robinson and Mike Maglione each received Honorable Mention.

- Advertisement -
Both the boys and girls soccer teams had mixed records in 2018, but more successes that might otherwise be apparent, Merkler said. Boys soccer, which was tasked with playig played state-ranked Seton Hall Prep, Montclair, West Orange and Millburn, finished with a 5-9-4 record. “They had a senior night victory over Cedar Grove and lost in the first round of the SEC Tournament to West Orange on penalty kicks,” Merkler added. Jake Weber and Christian Campos made 1st team All Division, Aidan Murphy and Grady Short made 2nd team, and Declan Maisano and Jerry Strippoli earned honorable mention.

Girls soccer, which finished with an 8-7-2 record, made it to the second round of the state tournament, losing to the #2 seed in the last four minutes of the game. Merkler noted that the girls tied state-ranked Nutley in one game and beat state champion Glen Ridge 5-4 in a game that went to overtime. Lara Tole was named 1st team All Division with Ally Madigan and Sarah Carlucci earning 2nd team honors and Colleen Whelan and Gaby Montagna earning Honorable mention honors. 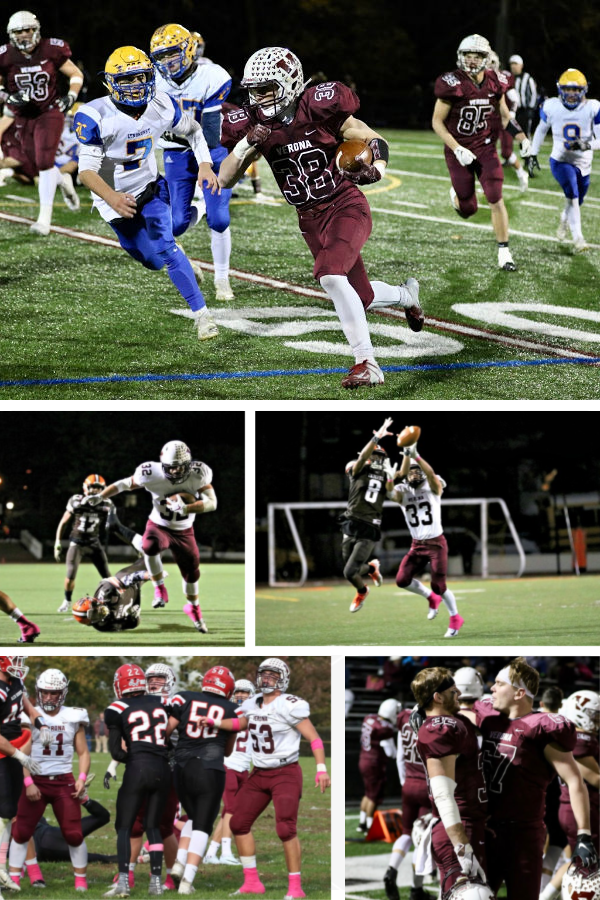 “Football earned a 7-3 record against an extremely difficult schedule,” Merkler said. “The highlight of their season was a 35-0 win over Caldwell and a 35-8 win over Cedar Grove on Senior Day.” He noted that the team earned the #2 seed in the state playoffs and lost the state semifinal game in what he called “a heartbreaker” with less than a minute. Nick Riggio, Nick Gonzalez, Steven Luehs, Matt Aldiero, Matt Frungillo, Brandon Cariani, Cael Zebrowski, Jake McConnachie, Adam Weiss, Jake Milmoe, Nick Giuliano and Zack Balogh all earned All Division honors, and Riggio, Gonzalez and Frungillo also earned All Group 2 honors.

Merkler hailed the VHS cheer squad for their fundraising efforts in the Cheer for a Cure Event at Bloomfield High School and Verona’s Cheer for a Cure event. “Both events benefitted breast cancer research and raised thousands of dollars,” Merkler said.

Girls tennis finished 7-17 in the SEC American Division and advanced to the semis of North 2 Group 1 State Sectional Championships. “They had a great 3-2 come-from-behind win at the ECT again MSDA with senior captain Megan Forrest getting the clinching point for us,” Merkler added. Megan Forrest was named 1st team All Division, Ashley Baumgard was named 2nd team All Division and Desiree Meyer and Gillian O’Donnell both earned honorable mention.

“Girls volleyball had another outstanding season, finishing the year with a 26-4 record,” Merkler said. “They won the SEC American Division for the third straight year, a state sectional championship for the third straight year, and made a trip to the group final for the third straight year. They had huge wins over Bogota and Caldwell and had to beat Mount Saint Dominic three times in the season, which is very difficult to do.” Hunter Coppola, Brooke Cooney and Nicolette Marino were named 1st team All Division. Daniella Trujillo was named 2nd team, and Kelly Waterman and Kate Ryan were named honorable mention. Coppola was named 2nd team All-State, All Groups and 1st team All Group 1, Cooney was 1st team All Group 1 and Waterman was 2nd team All Group 1. Merkler noted that Coppola was also named All-American this past season, making her the only Verona athlete to ever be named a two-time All-American.