Please Excuse Santa For Being Late 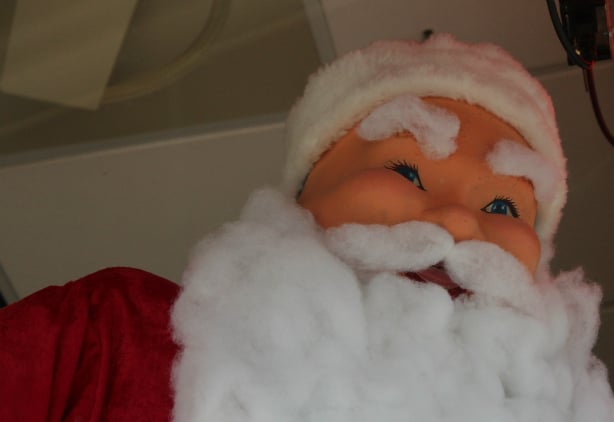 You can breathe easy, Verona: Santa is back.

No, not the big guy. We still have to wait until December 25 for him to appear. We’re talking about Verona’s Santa, the bowing Santa that has been in the window of Lakeside Deli every December since Jane and Jack O’Neil put him there in 1969.

The O’Neils originally bought their Santa in 1962 for Bond’s, the family-friendly restaurant that they owned at the time (it was where Avenue Bistro Pub is now), and they moved him to Lakeside Deli in 1969. Their investment in holiday decorating was pretty significant. The mechanical Santa and his hard-working mechanical elves cost the O’Neils $400, or more than $3,300 in today’s money.

“It was a big investment, but it paid off,” Jane O’Neil told us in 2012 when Santa turned 50. Her one regret: She never put a counter on him to find out how many bows he has made over the decades.

Old Veronans are prone to not starting the holiday season until the Lakeside Santa appears, and he has been a bit tardy in the past, too. There have been the occasional mechanical tune-ups, and delays while Santa was fitted for a new suit of red clothes, hand-sewn by Jane O’Neil. And sometimes, like this year, it’s just because things got busy at Lakeside. Verona does, after all, like to eat.

In addition to being a seamstress (and a devoted regular at the Verona Public Library’s Knit For A Cause group) Jane O’Neil is also a poet. She wrote this one a few years back, when Santa had to have what she laughingly called “hip surgery”:

Everyone asked us, what was the reason,
Our Santa Claus was late this season,
When he was brought up from the basement,
We found he needed a “hip replacement”,
From bending over all those years,
It seems he stripped a couple of gears,
Getting him fixed was rather stressful,
But his “operation” proved successful,
He’s all repaired and now he’s back,
Thanks to the skill of “Doctor Jack”,
Santa’s in our window bringing good cheer,
To the Town of Verona for the 48th year.