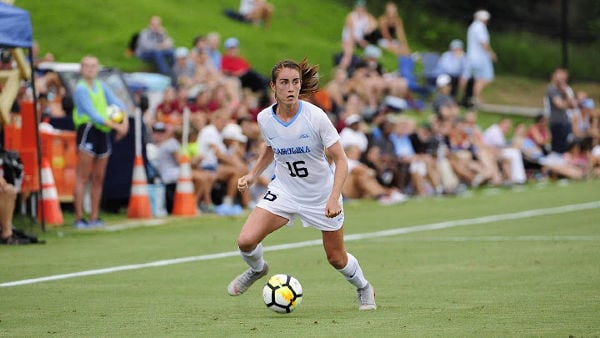 Julia Ashley has been named first team on the All-Atlantic Region Teams of the United Soccer Coaches (USC), formally the National Soccer Coaches Association of America. Ashley is a 2015 graduate of Verona High School who now plays for the University of North Carolina women’s soccer team.

The senior defender is one of the captains of the UNC team and a member of U.S. U23 National Team, and she has been named to MAC Hermann Trophy Watch List. According to UNC, Ashley has started at right back in all 25 games, playing 2,206 minutes, the highest total on team. She leads the team in assists with 10 and and is tied for team lead in points with 20.

Ashley’s goal in the opening minutes of the UNC-UCLA quarterfinals of the 2018 NCAA College Cup helped to send UNC to the semifinals. That game will take place on Friday, November 30, at 5:30 p.m. and will be televised on ESPN.