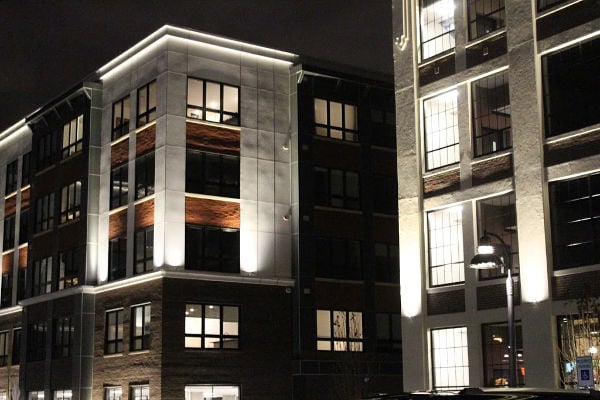 The 1968 graduate of Verona High School was back in town on Wednesday night, mingling with the other new tenants who will be moving into the Annin Lofts. The former flag factory has been converted into 52 loft-style apartments. A second building, constructed to the east on the site of the original Verona Inn, holds an additional 60 apartments. The buildings area mix of studios and one and two bedrooms, with rents that begin at $1,975 a month.

Though the exterior of original building looks very much the same, the transformation inside is total. The once vast floors that could make a flag big enough to display on the George Washington Bridge have been divided into apartments that retain its oversize windows and soaring ceilings while changing everything else. Carter Beard, president of Annin Flagmakers and a descendent of the original Annin family, marveled at the change. “When I worked here,” he said, “we knew we had 12-foot ceilings, but you never knew how tall that was.” The Annin company ended flag making in Verona in 2013, but continues to make flags at several locations in the U.S.

The roof that Beard once stood on to watch fireworks in Verona and Montclair has been replaced by a penthouse floor that has four apartments with private terraces, a large indoor club room accessible to all tenants in both buildings and two outdoor entertaining spaces.

“In today’s residential market, it’s all about the amenities,” said Edward Russo, CEO of Russo Development, the properties’ developer. Both buildings were built by Dinallo Construction, a company whose owner is related to the company that built the Claridge condominium towers decades ago. The ground floor units in the loft building also have private terraces, as do several of the apartments in the new building. According to Russo, just under 50% of the apartments in the complex have been rented and about 30 are already occupied.

“We couldn’t be more please at how this property turned out,” Russo told the crowd. “We had a lot of competition to buy these properties and we were fortunate to be selected. I hope the community is pleased with how the project turned out.”