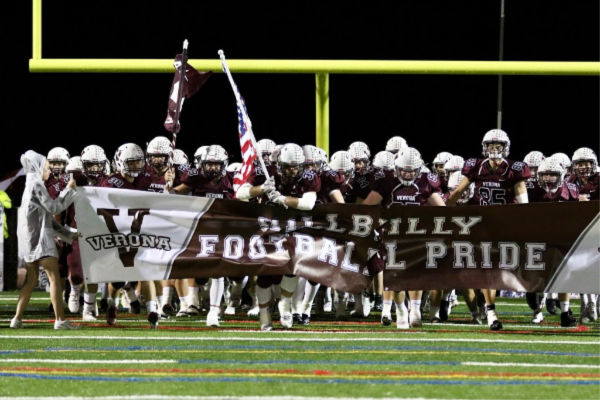 If you had bought into the outside opinion on Verona High School’s 2018 football season, this wasn’t going to be much of a season. The team’s long-time coach hadn’t been rehired and his first replacement, brought in to great fanfare, didn’t stay long. But Kevin Batty didn’t buy that assessment because, the new coach says, “people close to the team knew what these kids were capable of.”

What they turned out to be capable of took the 2018 Hillbillies to a 7-3 season and all the way to the semifinals of the state playoffs. For Batty, it is a testament to the leadership and efforts of the team’s seniors.

Seniors like Nick Riggio, who piled up an astonishing 1,370 rushing yards on his way to scoring 18 touchdowns. “Nick Riggio had a great year,” Batty says. “He was definitely our MVP on offense. He did everything we expected and more.”

The season got off with three convincing wins over Caldwell, Boonton, and Newark Collegiate. Then came two setbacks, a 41-13 loss to Shabazz High School and a 21-9 defeat at the hands of Weequahic. Verona got its mojo back with a resounding 42-19 victory over Hoboken and a 35-8 win over Cedar Grove on homecoming day. After closing out the regular season with a 40-1 defeat of Glen Ridge, the Hillbillies easily took the first Section 2 Group 2 playoff game.

“I am so proud of this team”, Batty says. “The coaches and the kids did a tremendous job.”

The new coach has in particular plenty of praise for his senior players, up and down the field, some of whom had not previously been starters. “Brandon Cariani was a mainstay on our offensive line,” Batty says. “He was the glue that kept the line together until we got healthy.”

“Matt Aldiero and Matt Frungillo both did a tremendous job,” he adds “Frungillo was a do-all guy and he really did a lot for us. Aldiero did the lead blocking for Nick Riggio, opening up the way for some of those big runs.”

Six of Verona’s 18 interceptions happened thanks to another senior, Nick Giuliano, who Batty credits with having done a lot of work over the summer. Also a hard worker: PJ Jordan, who worked his way to the starting free safety position. Then there was Adam Weiss, who stood out for his contributions “on both sides of the ball,” Batty says.

“When Cade Byrne came back at the end of the season, he helped us with our depth on the defensive line,” Batty says. And finally, Zack Balough. “He epitomizes the team player,” Batty adds. “Anything we asked him to do he did. He gave us some really quality minutes.”

Batty believes that the example set by the seniors can lead to a strong season for Verona in 2019. “Hopefully our younger players have seen that,” he says, “and capture that for next year.”