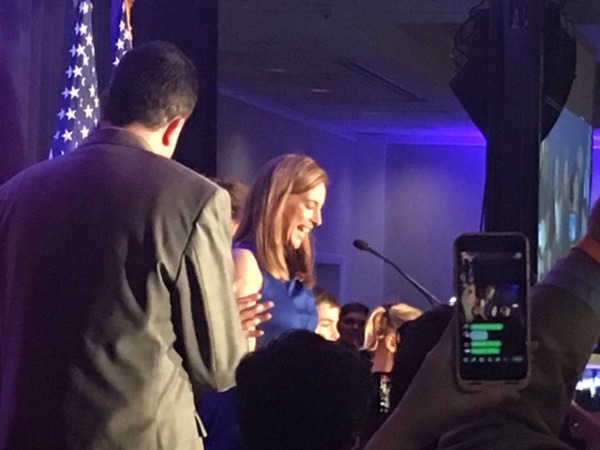 Sherrill, a Democrat, was the first of the 10 candidates to file to run for the 11th, and when she did so in May 2017, she seemed to be more than a long shot. The 11th district had been gerrymandered to favor Republicans and had been held by Rep. Rodney Frelinghuysen for 22 years. But in January 2018, Frelinghuysen stunned the district by announcing that he would not seek re-election.

“Tonight, we celebrate a historic moment, born of our deep belief in what we have to do to make America what it can be and should be,” ” Sherrill told a crowd of more than 2,000 supporters at the Parsippany Sheraton. “I swore my first oath to support our country when I was 18 years old, and ever since that day, my confidence in our democracy has never wavered. Out of the cynicism, the distrust, and the attacks on our democratic ideals, we have found what exists inside all of us: the simple truth that we love our country, that we are no longer taking our government of the people, by the people, and for the people for granted. In fact, we are going to do everything in our power to protect it.

“Tomorrow, our work really begins: for health care that doesn’t make you choose between treatment and putting food on the table; for a tax code that makes it possible to raise a family and retire here in New Jersey; for infrastructure that ensures you can work hard and also make it home for dinner; for gun laws that make it safe to go to school, to the movies, and to a church, synagogue, or mosque. Now is the time to face these challenges and rebuild our democracy — to restore the trust in our government and our faith in our country. Now is the time for our country to come together.

“Serving this country has always been the honor of my life, and I pledge to everyone in this district, that when I stand on the floor of the U.S. House of Representatives, raise my right hand and once again swear that oath to my country, I will also be swearing an oath to every resident of the 11th District.”

A former U.S. Navy helicopter pilot and federal prosecutor–as well as a mother of four–Sherrill ran a campaign that appealed to the often unheralded purple center of the 11th district as much as to traditional Democrats. According to unofficial results, Sherrill led Webber in all but one of the four counties that are part of the 11th. She won Essex 42,968 to 22,557, in Morris her lead was 76,819 to 64,339, and it was 22,961 to 21,305  in Passaic. Webber won only Sussex by a vote of 10,696 to 9,430. (These results do not include provisional ballots, mail-in ballots or early voting in all cases.) Sherrill won Verona 3,896 to 2,075 for Webber.

“Mikie Sherrill has modeled non-partisan leadership which we can all learn from,” said Laura Fortgang, Verona Democratic Municipal County Committee Chair. “The numbers in Verona show that people are ready for a new voice. Thank you to all in Verona who worked to make this victory happen.”

Webber, a gun rights advocate who has been representing the state Assembly district that includes Verona since 2007, stepped into the race in February, the first of five candidates who would run for the Republican nomination. The 45-year-old father of seven had styled himself as a Reagan Republican in his runs for state Assembly, but displayed an affinity for Trump politics in his Congressional race. He derided Sherrill as #MontclairMikie and her supporters as the “unhinged left”. President Donald Trump endorsed Webber and held a fundraiser for him, as did Vice President Mike Pence.

Thank you #NJ11! Here’s to always working towards a future that can be better for everyone. pic.twitter.com/khOzwAfN82

“I always thought we had a great path here because of all the grassroots groups and all the engagement from the community,” Sherrill told reporters after celebrating with her supporters. “I think this is a real win for bi-partisanship.”

Sherrill said that when she gets to Washington, she is going to focus on building bridges–literally and figuratively. She reiterated her commitment to affordable healthcare, tax reform, gun safety legislation and infrastructure. “It will be hard to grow our economy,” she said, “if we don’t improve our infrastructure.”