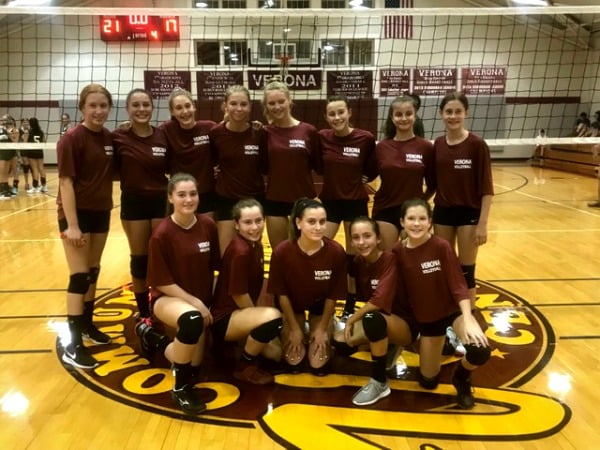 The Verona Recreation Department’s Suburban girls 2018 volleyball team completed an undefeated season against a tough slate of opponents this past Tuesday with a home win over West Orange. The team is made up of seventh and eighth graders.

“We split some matches with some teams the first two sets, but were always able to rally each time to win the third game and win each match,” says Coach Jeanie Kenneally. “All 14 girls contributed to a very successful season and have shown much growth. They are all really great girls having fun and learning volleyball, and we have had a great time along the way.”

“I have had the the blessing of coaching another amazing group of great girls at the Verona Volleyball Recreation level this year,” says Kenneally, who is in her fifth year of coaching. “I have enjoyed watching so many of these Recreation volleyball program girls emerge from the Rec program and grow through club and Verona High School JV and varsity programs into state champions. This team helps me to believe the volleyball future for Verona has strength in the upcoming years as well.”

The community has one more chance to see the 2018 champions in action. The team will be playing in the Montville “Slamboree” tournament at Montville High School tomorrow, Saturday October 27, from 8 a.m. to noon.