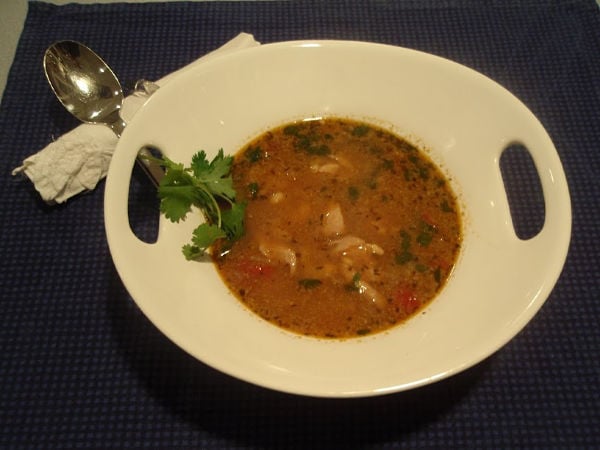 I had them at “chocolate”. For my kids, the thought of chocolate being incorporated into dinner was nothing short of heavenly. For me, it was a way to get them to try something new. So, if you are interested in experimenting with dinner, kids, and chocolate, today’s “Crock It!” recipe is a good place to start. Remember, I’m going to give you the recipe as I found it first, then my tips on making it.

What’s Next
1. Heat the oil in a large deep skillet and saute the chicken until it looses its raw color, about 3 minutes. Transfer to a 5-6 quart slow cooker.
2. Add the onion to the oil remaining in the skillet and saute until tender, about 2 minutes.
3. Add the garlic, cumin, oregano, thyme, chili powder, cinnamon, salt, pepper, and flour and stir until the onion is evenly coated. Cook for 1 minute, stirring constantly.
4. Add the broth and tomatoes and stir until the liquid boils and thickens. Transfer to the slow cooker.
5. Add the beans, cover and cook for 3-4 hours on high or 6-8 hours on low.
6. Reduce the cooker to warm. Add the chocolate and cilantro and stir until the chocolate melts, about 2 minutes. Serve immediately or hold on warm for up to 2 hours.

Notes From My Experience

This recipe is meant to serve 6, but we found it to be a little light for 4 adults and 3 small kids who don’t eat more than the minimum, even if chocolate is involved. I would use 3 lbs. of chicken if you are serving more than 2 adults.

I used chicken breasts the first time I made this (that’s what was in the freezer at the time) but would try a combination of breasts and thighs- I found the meat a little dry but that’s normal for me. I’m a dark meat girl.

I did not toast and grind my own cumin–I have 3 kids.

I did not chop up a 1oz. piece of chocolate–I used semi-sweet chocolate chips. I have 3 kids.

Finally, I used a full 32-ounce box of chicken broth to make it more like a soup.  Add 1 ½ cups when the onions and herbs are in the pot and thickening, but then add the rest once all ingredients are in the slow cooker.  You can of course adjust to fit your needs and soup style.

This recipe is great for the family or to serve to guests–I did. It’s delicious and totally different.  Great accompanied by a side of cornbread or buttermilk biscuits.

This recipe was originally published eight years ago as part of Tracy Bermeo’s “Crock-It” series. Tracy’s goal was to create slow cooker recipes that would simplify dinner for Verona’s busy parents. If you like soups, try Tracy’s Winter Vegetable Soup or Pumpkin Black Bean Soup.