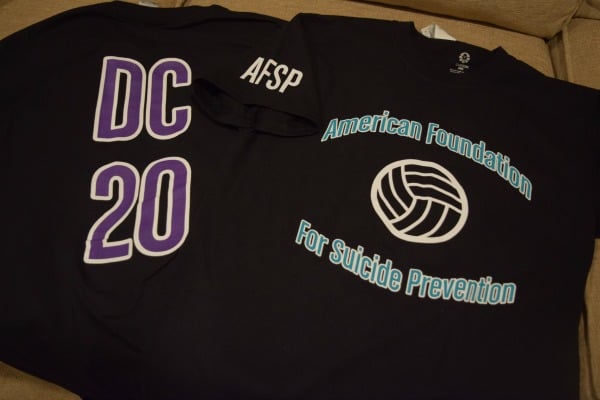 “AFSP is a very powerful foundation that could get all of the support in the world but it would still not be enough to emphasize the importance of it,” said Brooke Cooney, a co-captain of the volleyball team, referring to the American Foundation for Suicide Prevention. “Since we lost my brother to suicide, my family and I have been doing as much as we can to gain support and fundraise for the cause. It means the world to me that my team has come together to help raise the awareness that is very much needed. I hope that our game helps people realize that it is okay to not be okay and that they seek the help that they need. Everyone matters. Everyone has a purpose. I feel that it’s important for everyone to realize that.”

Her thoughts are echoed by teammate and co-captain Kate Ryan.”Many people deal with the effects of suicide when it is something that should be avoided at all costs,” she says. “I believe that our game coming up will show people how much we really care about this topic. It’s vital to let everyone know that they are loved and that they belong in this world in spite of everything.”

Rosemary Gabbe, the chair of an AFSP fundraising walk that will be held in Verona Park on Sunday, October 14, praised the girls for their leadership in a pre-game meeting. “As students at VHS and members of the championship volleyball team, your classmates may look to you for leadership and guidance on important issues. So by designating this game in honor of suicide prevention you are showing people that you care about the mental health issues that are impacting Verona and other communities today. Let’s bring awareness to the importance of suicide prevention. Seeking help is a sign of strength, not weakness. We need to de-stigmatize mental health issues in all our communities.”

Nicolette Marino, the third of the team’s co-captains, stressed the importance of community support to bring about change. “It is important to let everyone who has suffered with the effects of suicide know that they are not alone,” she said. “As a community we can stand together to raise awareness. Hopefully our game can inspire other towns too in knowing how important suicide prevention is.”

In the run-up to the game, the team has been selling t-shirts that honor Dan Cooney, who died in April 2017. The number 20 on the back of the shirt was the number that he wore as a key player on the baseball team of St. Peter’s Prep. “Suicide has directly affected one of our teammates,” said co-captain Hunter Coppola. “I am proud that our volleyball team came together to bring awareness to a subject that hits so close to home.”

The game will be played at VHS beginning at 5:45 p.m. and will include a table where attendees can get more information on the AFSP walk in Verona Park next month.