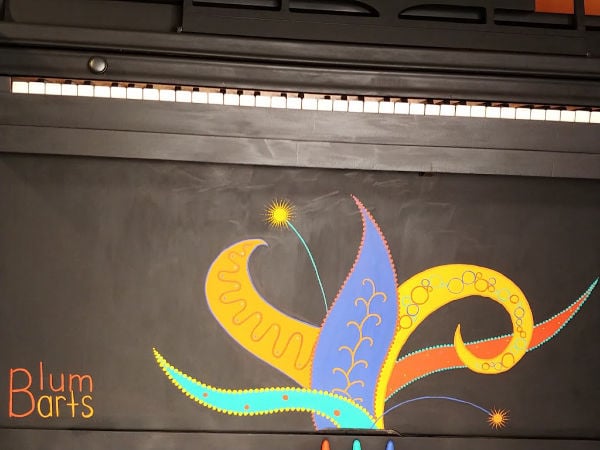 Verona artists Elina Rosenblum and Veronica Hapco are among the five art teams chosen to participate in this year’s Playin’ Around South Orange Piano Project.

The Piano Project, as you might have guessed, involves decorating a piano to be displayed in downtown South Orange near the South Orange Performing Arts Center (SOPAC) and at Seton Hall University. The show kicks of this Saturday, August 25, at noon and the pianos will remain on display through October 7.

Rosenblum and Hapco, who have lived in Verona since 2013 and 2010 respectively, have a decorative arts business called Blum Arts (Blum Arts on Instagram). They take commissions for private and public art projects including murals, stained glass, faux stained glass, and mosaics. “Decorative arts make our world a little bit more beautiful,” says Rosenblum. “Everything we do looks happy, and it lifts people’s spirits. Our philosophy is that people have enough stress in their life. We want to improve the quality of their life through art.”

The Playin’ Around South Orange Piano Project is now in its sixth year and there is quite a competition to be chosen: This year, more than 30 artists submitted designs for it. Blum Arts was notified that they had been chosen at the end of July and by the time the pianos were delivered, they had only a week to execute their design. It will be on display in Spiotta Park, which is just east of SOPAC near the intersection of South Orange Avenue, Valley Street and Scotland Road. While the pianos are on display, anyone can stop by and play them before they are auctioned off or donated to benefit SOPAC’s education programming.

As they await the reaction to their piano, which has designs on on its top and sides as well, Rosenblum and Hapco are contemplating ways to bring public art to Verona. “We’re looking to get more involved with Verona,” says Rosenblum, who adds that the pair have been in contact with Steve Neale, Verona’s director of administration and economic development. “We’re happy to contribute any talent we have.”