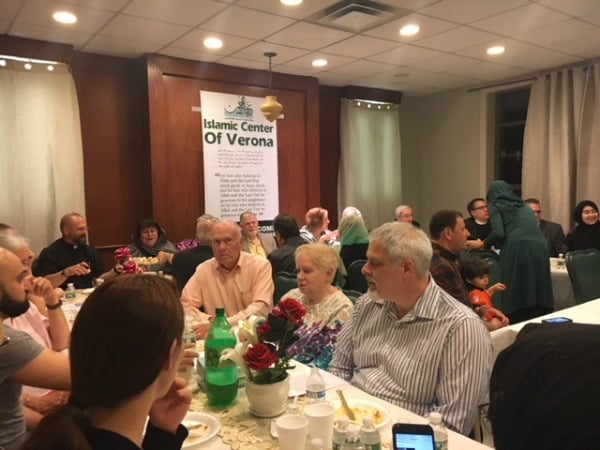 The Islamic Center of Verona invited a large group of parishioners and clergy members from First Presbyterian Church, the Episcopal Church of the Holy Spirit and Our Lady of the Lake to a dinner on Saturday evening to break the fast that mosque congregants observe during the holy month of Ramadan.

The iftar dinner allowed the leaders and worshippers of the mosque to introduce themselves to the other faith communities and for the 30 guests to ask questions about the Islamic religion and the Islamic Center. Guests were able to observe a prayer service before being fed a meal of chicken, lamb, stuffed vegetables and dessert, prepared by the worshipers. The children who attend the mosque presented each of the guests with a basket of fruit to take home at the end of the evening.

“I am still beaming from last night,” said Kathy Stiefbold Van Benschoten, a life-long Verona resident and parishioner at OLL, on Sunday. “What giving, sharing, welcoming, open people. I was so blessed to be invited and I welcome them as new neighbors to town. With the loss of so many houses of worship due to poor attendance, it is really nice to have a new house of worship in town.” She expressed the hope that the recent reading of The Wishtree in Verona’s elementary schools, a story that deals in part with Muslims moving into a town, would help Verona families to welcome the Islamic Center.

Karen Blasi-Blinder, a parishioner at Holy Spirit, was also among the guests. “They were extremely welcoming and the food was excellent,” she said. “My biggest takeaway was how happy they are to be worshipping in their community. All of us can relate to that. Having a place to worship in the community is important.” One of the mosque’s worshippers had told guests that during the 28 years that she has lived in Verona, she had always had to travel to other towns for worship. 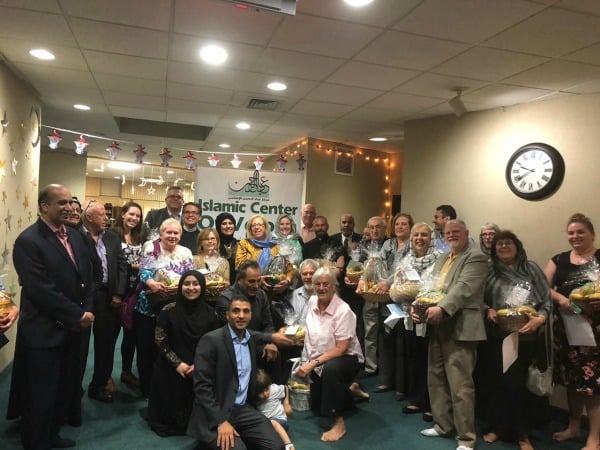 Dr. Montaser Awad, a long-time Verona resident who spearheaded the creation of the Islamic Center in the former synagogue of Congregation Beth Ahm, had promised to include the community in Ramadan events when he gave his first interview about his plans. “This is our model,” he said in March. “At any event for Muslim people, we will try to share our happiness with other people.” Dr. Awad introduced guests to the Islamic Center leader, Sheikh Hatem Farid, a well-known cleric from Egypt, and to congregants who ranged from college students and business leaders to elected officials like Gino Elmarassy, a banker who serves as a councilman in Roselle Park.

Members of the congregation–male and female–sat among the guests at the dinner and gave perspective on many aspects of Muslim worship, such as the rules about fasting from sun up to sun down during Ramadan. “If you end up not keeping the fast,” Blasi-Blinder said, “you have to feed a poor person. I like that.”

“It was wonderful to meet them as neighbors and people of faith,” Van Benschoten added. “Some people fear the unknown or fear a group due to the actions of a few but prejudice punishes innocent people. I am looking forward to future interactions with them. I don’t want to wait until the Thanksgiving ecumenical service to get together again.”