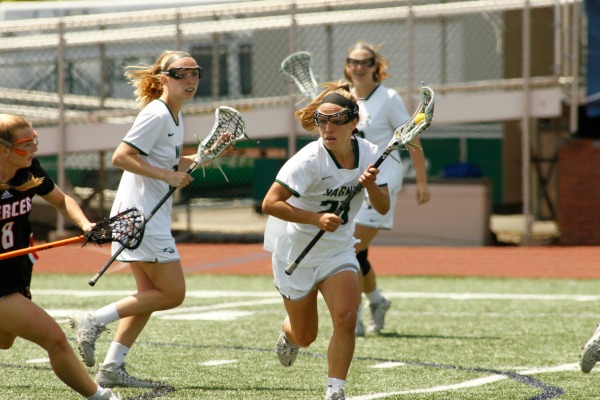 Lauren Ednie, a 2014 graduate of Verona High School, has been selected to play in the 2018 Intercollegiate Women’s Lacrosse Association (IWLCA) Senior All-Star Game. Ednie was recently graduated from Wagner College, where she played for its NCAA Division I girls lacrosse team, the Northeast Conference (NEC) champion.

Ednie was one of the first girls lacrosse players in Verona, starting with a “mini-lax” program when she was in first grade. She played varsity as a defensive midfielder all four years at VHS, and was the team’s high scorer in her senior season.

According to Wagner, Ednie developed into of the most accomplished players in Seahawk history, buoyed by a huge senior season when she was named the NEC Midfielder of the Year and First-Team All-NEC. She then capped her NEC career by taking home the league’s Tournament MVP honors.

Ednie’s game-winning goal in the second overtime in the NEC title game at Bryant was her fifth tally of the game, and propelled the Seahawks to a 12-11 win and into an NCAA play-in game vs. Mercer. Against the Bears, the Verona native tallied three points (1g, 2a) in the 13-9 win, which earned Wagner a matchup at No. 7-seeded Towson where, in a 16-6 loss to the Tigers, Ednie capped her sterling Seahawk career with a hat trick.

On April 2, Ednie was named NEC Player of the Week with a five-goal, one-assist outburst that carried Wagner to a 14-10 win over Ivy League Columbia. The senior midfielder also picked up a team-high five ground balls, four draw controls and two caused turnovers as Wagner recorded its first-ever win over the Lions.

The all-star game will be held on Tierney Field at U.S. Lacrosse headquarters in Sparks, Md., on Saturday, June 2, with the opening draw set for 11:30 a.m.